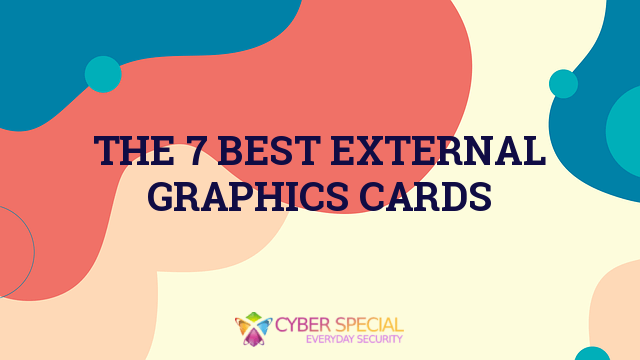 If you’re looking for an external graphics card or expansion enclosure, we’ve reviewed seven of the finest external GPU alternatives currently available in our article.

External graphics cards have become a viable choice for customers that require high-end GPU computing power in a compact and mobile form factor, thanks to the rise of USB-C and Intel’s Thunderbolt interface.

However, there are a plethora of external GPU enclosures on the market, and determining which is the best fit for your needs isn’t always straightforward. If you’re thinking about acquiring an eGPU, we’ve covered seven different possibilities in this tutorial. If you’re looking for an external graphics card, one of the options listed below might suffice.

What is an eGPU (electronic graphics processing unit)?

External graphics cards can provide users with more GPU computational capacity, but they come with their own set of disadvantages. There will be a performance decrease because eGPUs must be connected to your PC or laptop via a cable (USB-C Thunderbolt). A GTX 1070 in an external enclosure linked to a desktop computer will not give the same performance as if it were inserted directly into the PCIe lane on the desktop.

So, an external GPU is really just a realistic solution for laptop users who don’t have a powerful GPU built into their system. Unfortunately, the bulk of those who might profit from the use of an external GPU (users with older laptops) will be unable to do so. Because external graphics cards now require a USB-C Thunderbolt 3 connection to function, this is the case. Furthermore, most older computers (or even somewhat older budget laptops) lack a USB-C port.

So, while an external GPU may be a viable choice for some users, the folks who would most likely profit from it are the ones who won’t really utilise it able to use an external graphics card.

In any event, if an external graphics card is the appropriate choice for you, we’ve covered seven of the top eGPUs currently on the market in this article to help you pick the ideal one.

A Quick Look at the Best Graphics Cards for External Displays

The table below shows our picks for the best overall external graphics card, the best value option, and the best budget-friendly alternative for a fast look at our three top external GPUs.

The Gigabyte AORUS Gaming Box is definitely your best bet if you’re searching for an external GPU that will give you with the greatest out-of-the-box performance. The Gaming Box from Gigabyte is one of the few solutions that comes with a video card already installed. The Gaming Box is now available with two GPU options: an RX 580 or a GTX 1070.

The Gaming Box is 6′′ x 4′′ x 8′′ in size and weighs roughly 4.5 pounds. As a result, it’s a relatively small external GPU solution that should be rather portable.

Finally, if you don’t want to buy your own graphics card to put within an external GPU enclosure, the Gigabyte Gaming Box is definitely the best choice.

None of the other alternatives on this list feature a graphics card after the Gigabyte Gaming Box. That is, however, the industry norm for external GPU enclosures. They give you the option of installing your preferred graphics card.

The Akitio Node, in our opinion, is one of the finest enclosure-only solutions. It has a 400-watt power supply built in. If you’re used to desktop power supplies, a 400W supply may now appear to be plenty to support a recent high-end graphics card. It’s worth noting, though, that the power supplies in these external GPU enclosures won’t have to supply power to other components like they would in a regular PC. They’ll mostly be responsible for providing power to the graphics card. With that in mind, a 400W power supply should plenty for a GPU in the mid-range or higher price range.

The Node is also equipped with a PCIe (x16) slot and costs slightly under $250. That means that putting an RX 580 inside would cost over $400, making it less of a bargain than the Gigabyte Gaming Box in terms of price-to-performance.

Also Read:  How to Watch ZEE5 in the USA

The Node also has a carrying handle, so even if it’s a little bigger than the Gigabyte Gaming Box, it should be rather easy to transport.

If you don’t need a high-end graphics card in your external GPU enclosure, Sonnet’s eGFX Breakway Box might be the appropriate choice for you. The Breakway Box is one of the most economical solutions currently available, costing just under $200. (Alienware’s Graphics Amplifier is the sole less expensive option, but it only works with certain Alienware PCs.)

A 350W power supply is included inside the Breakaway Box. It measures 14′′ × 8′′ x 7′′ and weighs around 7 pounds (without a graphics card installed.) So, while it’s a little lighter than the Akitio Node, it’s also a little smaller.

However, the 350W power supply should be sufficient for mid-range and low-cost graphics cards. If that’s not enough power for you, the Breakaway Box is also available in 550W and 650W versions.

Finally, if you don’t have a large budget and want a low-cost solution that allows you to install a mid-range GPU, the Breakaway Box is a viable option to explore.

Another alternative worth mentioning is the ASUS XG Station PRO. It does, however, have a few drawbacks. To begin with, the XG Station PRO is significantly more expensive than both the Akitio Node and the Sonnet eGFX Breakaway Box, at just under $330.

Despite costing $100 more than the Node and $130 more than the Breakaway Box, it only comes with a 330W power supply, which is less power than both of the above-mentioned alternatives.

The ASUS ROG XG Station 2, which comes with a 600W internal power supply, is a more powerful option. The XG Station 2’s primary flaw is that it costs $550 and doesn’t come with a graphics card. So, if you combine the XG Station 2 with a higher-end GPU, you could be looking at a total cost of more than $900. You’d be far better off choosing one of the choices provided above at that time.

As a result, while ASUS’ external GPUs are formidable options in terms of build, they don’t make much sense in comparison to the competition at the moment.

That’s clearly one of the larger power supply in a sub-$300 external enclosure, so it’d seem like a good choice for anyone wishing to use a high-end GPU. The Mercury Helios FX, on the other hand, has one flaw…

The Mercury Helios FX only has a PCIe 3.0 (x4) slot, rather than a PCIe 3.0 (x16) slot. The performance difference between an x4 slot and an x16 slot isn’t considerable over a wide range of benchmarks, therefore this isn’t a major issue. However, because an eGPU already suffers from a performance loss due to the Thunderbolt connection, adding another bottleneck isn’t ideal.

Again, there won’t be much of a change… However, given that there are more affordable options with an x16 slot, I’d recommend going that route instead.

Because of its pricing, Razer’s Core V2 external GPU enclosure is another option that doesn’t make much sense. It has a 500W built-in power supply as well as a PCIe (x16) slot. Despite the fact that it costs under $500, it does not include a graphics card.

When you include in the Core V2’s expensive initial cost, you’re looking at a $1,000+ expenditure to obtain a high-end graphics card to go inside of it. And, when you consider that solutions like the Akitio Node will provide you the same ability to handle a powerful GPU for a lot less money—or when you consider the price of the GTX 1070 edition of the Gigabyte Gaming Box—it seems insane to spend $500 on the Core V2.

The last option on our list is the one with the best price-to-performance ratio. The Alienware Graphics Amplifier is the most affordable external graphics enclosure alternative currently available, costing slightly under $170.

It can also easily support a higher-end video card thanks to the enclosure’s built-in 460W power supply. So, with all of this, how is this not the finest external GPU choice on the market?

The primary issue with the Alienware Graphics Amplifier is that it has a proprietary connection that is only compatible with specific Alienware desktops and laptops. Unfortunately, this feature alone effectively excludes the vast bulk of the market from using Alienware’s Graphics Amplifier.

If you do have a suitable Alienware computer, though, this is by far the greatest external graphics enclosure available.

Which External Graphics Card is the Best Fit for You?

If you’re looking for an external graphics card to help enhance the GPU computational capability of your current system, there are a few options to consider. And, actually, just a few of those possibilities stand out as providing a reasonable product at a reasonable price. Gigabyte’s Gaming Box, Akitio’s Node, or Sonnet’s eGFX Breakaway Box are the finest solutions in our opinion. Alienware’s Graphics Amplifier is also a fantastic alternative if you have a compatible Alienware PC.