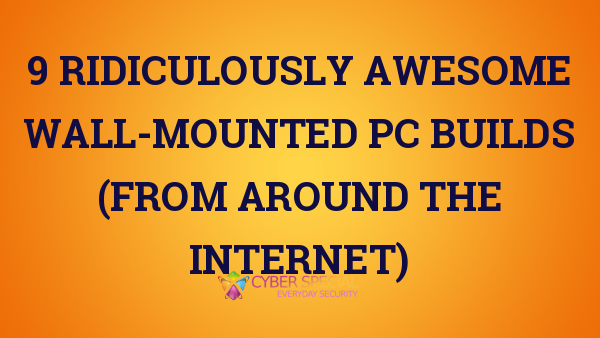 Tech Power Up forum modderator built this beautiful wall-mounted black and red PC. He posted his build log on the Tech Power Up forums. Modderator used an Intel Core i5-6600K motherboard, an MSI Z170A Gaming 5 motherboard and an MSI GTX970 Gaming 4G graphics cards. He also used a Raijintek Triton IO cooler and 8GB Kingston HyperX Fury black memory. Moderator used a wooden board with a carbon fiber sticker to mount the mounting plate. Moderator provides a link with more information on how to mount a wall-mounted computer.

Recoil P, an Overclock.net forum member, built this amazing black-and-blue mounted computer that he called ‘TheRecoilMachine. This wall-mounted system is older than we know, the original post was in 2014. He used an Intel Core i7-920 with a GTX590 in unison, along with a custom liquid cooling system with parts from Aquacomputer and Alphacool. Recoil P has a build log that will give you more inspiration.

Recoil P’s “TheRecoilMachine” was one of the oldest build logs of a wall-mounted computer. However, Show4Pro showcased this system on the Overclock.net forums back in 2013. Show4Pro used an Intel Core i7 950 dual AMD 7970 graphics card, ASUS Rampage III extreme motherboard and 4x 120GB Corsair Force SATAs (which back then were expensive) for the core. He also had an advanced liquid cooling system with parts from EK and Swiftech, FrozenQ and XSPC. You can find Show4Pro’s build log here at the Overclock forums. The build log provides a detailed overview of how the system was planned.

Also Read:  What happens if VPN disconnects (and why)

Chris Howell showcased this wall-mounted system on Bit-Tech.net in 2015. It is easily one of my favourite builds. It has a very steampunk look, but it looks more like something you would find in an old building’s power generator room. The copper-painted PSU grill, fan blades and hard drive add a rustic touch to the build. This is the style I would choose if I ever had to wall-mount my system. You can see the showcase Bit-Tech.net created for this system by clicking here.

You can see this Flickr photo by FerosRigs. It shows a variety of wall-mounted computers. The wings that they made to accommodate two 360mm radiators are cool. I also like the liquid coolant. The back of the SSD case and hard drive cases looks like carbon fiber tape, which gives it a cool effect. I love how the tape was applied to the hard drives so that they stand out at the edges.

The wall-mounted computer with Bumblebee theme by imgur user marksmanguy may be the best-looking and most detailed system on this list. This build stands out with its black and yellow theme and blue lights. But the Bumblebee head, and armor piece in the top left corner really make it stand out. The steel plate at its top, the tire sticking out the top left corner and the Autobot icon projected onto a ceiling are all my favorite features. This is not only one of the most impressive wall-mounted PCs, but Marksmanguy’s build log is amazing, with almost 200 photos that show how much detail and work went into it. This is definitely worth checking out.

Also Read:  Do Streamers Use a VPN (Do You Really Need It?)

Reddit user, u/Vicoooo, has created another wall-mounted system. This wall-mounted computer is a great example of how you don’t need to be crazy or detailed to make it look cool. As you can see, u/Vicoooo created a great flow by using black and white components. It also has a minimalistic look thanks to the wood-planked mounting plates. The RGB lights add a nice touch. You can see more of the build by u/Vicoooo at their imgur gallery.

JalfreziJeff uploaded this wall-mounted carbon-fiber-based PC build. The build features a lot RGB lights, a plexiglass cover over the motherboard and good liquid cooling. It makes for an amazing-looking system. The best thing about this build is the way the RGB lights reflect off of the clear liquid cooling tubes. It gives the build a warm feel. You can see more photos of this build at JalfreziJeff’simgur gallery.

Last but not the least, another wall-mounted PC is available. This one is by imgur user, kdevault813. This one includes some rustic-looking hardware that helps tie the theme together. It even has an old condensermeter. It includes an AMD Ryzen 7 3800X processor and an RX5700 XT graphic card. 32GB of RAM is also included. Reddit post by kdevault813 about his build can be found.

We want to see your wall-mounted PC!