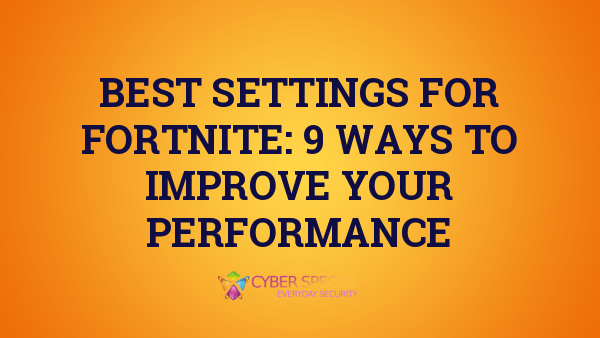 Are you struggling to get a playable framerate in Fortnite? Check out our list of nine ways that you can increase your FPS in Fortnite below.

While your skills with a keyboard and mouse will be the biggest determining factor in how good you are at Fortnite, if you have an older computer or laptop that can barely run the game, you’ll never reach your full potential. If you want to stay competitive, you’ve got to make sure that the game’s framerate doesn’t drop so low that it is impacting your ability to play.

Your first step towards being able to increase your FPS in Fortnite is going to be playing around with the game’s graphics settings. As with every other game out there, the settings you choose are going to have a huge impact on the way that your game runs. Dropping all of your settings down low will obviously have a big impact on how good the game looks, but it will also greatly speed up your frames-per-second and allow you to get more manageable performance out of an older rig.

Of course, you’re going to want to find a balance here between graphics and FPS. At a certain point, getting a few more frames per second really isn’t going to be worth the drop in visual quality. Where that particular line might be is a personal choice, of course, but try playing with the settings until you find the sweet spot for your game. When you make it, the game will feel far more fluid.

Shadows are really easy to miss in Fortnite. Thanks to the game’s graphical style, you’re probably going to forget that they are there during most of your games. Unfortunately, those shadows that you’re ignoring actually take a fairly severe toll on your system. If you’ve got an older graphics card or if you simply don’t want to deal with dropping all of your settings for a performance boost, your best choice might be to turn shadows off during the game.

Turning off the game’s shadows really won’t have much of an aesthetic impact on your game. You’ll definitely notice the effects if you look closely, but it’s not really something that you’ll see when you’re in motion or in a firefight. You might be able to get a little more out of the game’s other settings while keeping a higher FPS if you are willing to drop your shadows entirely in favor of better performance overall.

Resolution is another one of those factors that are going to impact your game. While you’ll likely try to play the game at its highest possible resolution first, dropping things down a little bit can take some pressure off of your GPU and allow for better overall rendering. Yes, this means that you probably won’t get as much out of your expensive new 4k monitor as you’d hoped, but you’ll definitely get more frames per second and you’ll be more competitive in the game.

It seems like the sweet spot for Fortnite is in the 1080p range even for modern computers. You can drop down to this traditional HD setting in your settings menu, which will give you a fairly significant bump in your performance. Again, this is an area where you’re going to have to make the decision between performance and aesthetics, as you do run the risk of losing out on the higher visual quality for which you paid.

But, if you are struggling to reach at least 30 FPS while playing Fortnite, one of the easiest ways to bump that number up is to simply lower the resolution of the game—even if that means dropping below 1080P.

Some of the best settings for Fortnite don’t actually have much to do with the game itself. There are a number of issues on your computer that can wreak havoc with your FPS. Some of these issues can actually spring from places like your operating system (most likely, Windows). If you aren’t up to date, you very well might be getting a poorer performance than others who have updated their systems. While this is certainly an uncommon issue among players, it’s one that’s worth checking out if you feel like you’re getting fewer frames per second than your hardware should support.

The best way to keep ahead of this problem is to keep Windows updated. Not only could some old issues keep your game from running as well as it should, but there are certain Fortnite patches that actively improve performance when paired with certain software updates. Keeping your system up to date really is something that will benefit every program you run.

If you’re using a laptop, your GPU might not be functioning at its full capacity. In fact, you might have enabled settings that handicap it severely, drastically reducing your computer’s ability to play games of all types. In this case, what you’re looking for is a power setting that helps to provide your battery with a little more life with the trade-off of slowing down your computer. Once you disable this setting, you should be able to get a few more FPS.

The best settings for Fortnite are not always the best settings for your laptop. If you’ve got a power-saver mode engaged, go ahead and switch back to normal power. In fact, your laptop might even have a game mode that you can engage that will ensure that you’re getting the most graphical power possible. If all else fails, make sure that you’re in a place where you can plug your laptop in – it’s not uncommon to see a plugged-in laptop get significantly more frames per second than one running on battery power.

As any experienced gamer knows, the first place to look when you’re having game performance problems is with your drivers. The drivers for your GPU, in particular, can be problematic, especially when you’ve forgotten to update those drivers for the last few months. Again, this is a situation in which you’re looking to bring your hardware in line with all the changes that Epic has made to the game, so you’re really hoping that either the old drivers interacted poorly with the game or that Epic has put out an update that works in a friendly manner with your graphics card.

It’s always a good idea to take a good look at your GPU’s drivers. If you’ve noticed a recent drop in performance, you should always take a look at the drivers first. If you’ve just started playing and you’re not sure what to do next, the drivers can likewise be a good place to check out. Updating your graphical drivers should have a positive effect on all the other games on your computer as well.

7. Switch to a Hardwired Connection

If your poor in-game performance isn’t related to your framerate (via your hardware or software), you might want to look at your internet connection. A bad connection can certainly make things seem very sloppy, with lag definitely dragging down your ability to play the game. While you honestly don’t need incredibly fast internet performance to get the FPS you need from the game, a bad connection really can ruin your ability to play. That’s why it’s so important to try going wired before you make any other major changes.

This might be more of an experiment than anything else, especially if you’re dedicated to playing Fortnite on the go. Plug into an ethernet cable and see if you get a better response – if you do, you know it’s the wi-fi connection in your area that’s causing the real problems. Once you know that, you can start playing in a different place or you can invest in a better wireless router.

If you go through all the work of tweaking your settings and you can’t get your framerate to an adequate level, it’s time to admit defeat and start considering an upgrade. While Fortnite honestly isn’t the most graphically-intensive game out there, it’s complex enough that it will give some older GPUs (especially integrated GPUs) a problem. As such, your most reasonable move will likely be to upgrade your graphics card to something that’s within the recommended range.

Fortnite recommends an NVIDIA GTX 660 or an AMD HD 7870 graphics card. If you can jump up to the recommended GPU, you will see a huge jump in performance. However, while the GTX 660 and HD 7870 were considered mid-range graphics cards when they came out, they are now fairly old. And, so even a new ~$100-$150 graphics card (like a GTX 1050 or RX 550) will be powerful enough to run Fortnite on a 1080P monitor with no problems.

9. Get A New Computer or Laptop

Unfortunately, there are some problems that even a new GPU can’t solve. If you’re running an older PC with minimal RAM and an older processor, you’ll likely have to do a full upgrade in order to increase FPS in Fortnite and run the game at the settings that will give you top-tier performance.

The great news is that you don’t need an incredibly expensive PC to run the game. Anything that’s got a modern processor and 8GB of RAM will serve as a great platform for running the game. So long as you combine the new computer with a relatively nice GPU, you’ll never have to worry about your frames per second. The best news about making this upgrade, though, is that you should get a huge performance boost in every game you own – there will be no need to worry about troubleshooting games other than Fortnite.

You can check out our Affordable Gaming PC Builds guide for some budget-friendly desktop options, or our Best Gaming Laptops Under $1,000 guide if you want to go with the mobility of a laptop. Any of the options on those lists should work well for playing Fortnite.