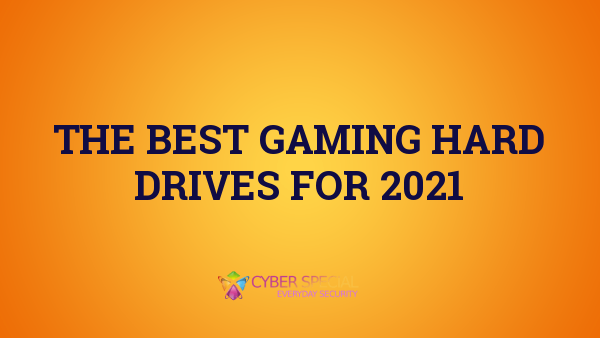 We compared some of the best hard drives for gaming across various budgets. These hard drives are ideal for gamers or anyone else looking for affordable storage in bulk.

While solid state drives are significantly cheaper than they have been in the past, traditional mechanical hard drives are still a great affordable storage option. And, even if you are going to get a solid state drive (check out our recommendations for the best SSDs available right now), it’s a good idea to get a traditional hard drive to support it. In this article, I’m going to go over the best hard drive options for your gaming computer.

Your hard drive isn’t going to have the hugest impact on your gaming experience. However, they are still extremely important as they hold all of the important data, programs, and applications that are on your computer.

*NOTE: If you’re looking to increase the amount of storage in your laptop, make sure you get a 2.5″ drive and not a 3.5″ drive—as they will  not fit inside of a laptop.

**NOTE: Need an external storage solution? Check out our guide on the Best External Hard Drives.

How Much Storage Do You Need for Gaming?

As far as gaming goes, the only area where hard drives will make a difference is in the time it takes to load your game. Although, having a lot of storage is important for most gamers, who typically also have large amounts of music and videos. Some gamers even record their own videos. If that is the case, then the size of your hard drive is going to be extremely important.

I usually recommend an HDD/SSD with 1TB of storage space. This gives you plenty of space and it’s fairly affordable. If you’re working with a budget, then you’ll have to consider going with a smaller HDD and upgrading to more storage later.

In any case, you should look to get an HDD with a speed of at least 7200RPM. This will give you decent results in game load time and how quickly your system starts up (although, even at that speed, HDDs still lag significantly behind SSDs in load times). If you’ve got a lot to spend on your new build (or upgrade), you might want to consider getting an SSD, and if you have a medium-range budget, getting a smaller SSD and pairing it with a large mechanical hard drive makes sense, too.

I only chose two hard drives for each price range and while there are definitely some other worthy HDDs in these price ranges, I felt these offered the best returns for PC gamers.

A full 1TB of hard drive space is enough to match the needs of any budget-oriented gamer.

And, coming in at under $40 for the 1TB version, this 7200RPM Western Digital HDD is the sweet spot for budget gaming PC builds.

Now if you’re looking to do a lot of video editing and you have a larger budget, you’ll probably want to look at a solid SSD and pair it with the 2TB or 3TB version of this hard drive.

Otherwise, this HDD will give you everything you need storage-wise.

Ultimately, if you’re looking for a cheap storage option that will give you plenty of space to hold all of your games (has the ability to hold ~80 25GB games), then either this Western Digital Blue or the Seagate Barracuda drive below will be your best bet.
Get This HDD

The Barracuda offers essentially the same performance as the Western Digital Blue drive listed above. Both options come in at similar prices (both 1TB versions are ~$40), have similar capacity offerings, and offer the same amount of cache.

In the end, though, my recommendation for the Barracuda is the same as it is for the WD Blue drive listed above: it’s a perfect option for gamers who need a large cheap storage drive to hold their games. It will also work perfectly when paired with a mid-sized SSD to maximize speed and cost. And, ultimately, if you’re on a budget, the Barracuda or WD Blue will probably be the best gaming hard drive for your needs.

Western Digital’s Black hard drives are a bit different than their Blue drives and are a bit faster, and are better-built to endure heavier usage. They also come with a 5-year warranty which is quite a bit longer than WD’s Blue drives come with (only 2 years.)

In most cases, I would say that the Blue drive (or Seagate’s Barracuda) would be a better option than the WD Black just because of the savings. But, if you have a large enough budget, the Black is not a bad choice.

Again, if you’re just looking for an affordable drive that will give you plenty of storage, you’ll probably want to go with the WD Blue, or Seagate’s Barracuda 1TB. However, if you’re looking for a bit more performance out of your mechanical hard drive, then this black version isn’t a bad choice.
Get This HDD

A lot of people recommend to just get a smaller SSD for the same price and then just add a mechanical hard drive later down the road to maximize your storage capacity. However, if you need the storage capacity now and don’t want to wait to get it, you can go with an option like the FireCuda and get a bit more speed to go along with your higher capacity drive.

Ultimately, if you’re building a budget gaming PC, I would probably recommend the typical route for storage, and that is to start with a smaller SSD and add more storage down the road. And, if you have a larger budget, you can either just start out with a large SSD, or combine a smaller-to-mid-size SSD and a large mechanical hard drive right from the get-go.

The FireCuda does come in 1TB and 2TB versions and both come in at under $100.
Get This HDD

If you have a fairly large budget and you want to pair an SSD with a huge mechanical hard drive to maximize your system’s speed and storage capacity, you might want to consider Seagate’s Barracuda Pro.

The drives also come with a 5-year warranty, which is quite a bit longer than the standard Seagate Barracuda drives.

Overall, the Pro version is a bit faster than the standard Barracuda and if you’re looking for a little bit more performance from your drive, it’s not a bad option for you to consider.
Get This HDD

We already went over what Western Digital’s Black drives bring to the table above on the 1TB version.

The drive comes with a 5-year warranty, which is right on par with the Seagate Barracuda Pro drives. It also operates at 7200 RPM and comes with 256 MB of cache.

You can get the Black in capacities of as small as 500GB and as large as 6TB. So, there aren’t quite as many options as the Seagate Barracuda Pro if you want a really big drive—but, the Black does come with double the cache…

Overall, I would probably lean towards the WD Black for the extra cache, but the Barracuda Pro is a bit cheaper and will offer similar performance. Ultimately, you won’t go wrong with either option, and if you can get either drive on sale, that’d be the route to go.
Get This HDD

If you’re looking to spend over $200 for a hard drive, you have a couple of options….

First, you can just get a larger capacity version of any of the drives listed above.

Ultimately, though, I wouldn’t recommend spending over $200 on a hard drive if you’re building a system for gaming unless you have an unlimited budget and you have already chosen a large SSD for your build.