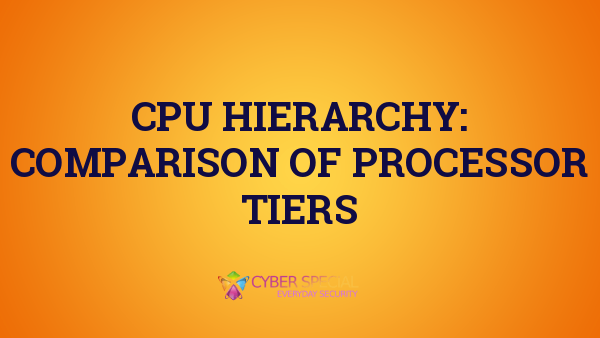 If you’re searching for a CPU hierarchy list to help you choose the perfect processor for your needs and budget, we’ve included four tiers of CPUs in this post, along with commentary on which options make the most sense for various use cases.

Putting together a CPU hierarchy appears to be a simple operation… Just make a list of all the processors available, starting with the best-performing and ending with the worst-performing.

But how would you rank the processors in terms of performance? How is your gaming performance? Performance on a single core? Performance with several cores and threads? Intel and AMD have carved out divergent pathways for their processors over the last few years, as we’ve seen. Intel continues to outperform AMD in single-core applications, while AMD continues to outperform Intel in multi-threaded applications.

As a result, putting together a CPU hierarchy list isn’t as straightforward as declaring “processor x surpasses processor y, hence processor x deserves to be placed higher.” That isn’t even taking into account the higher price-to-performance value that a less expensive CPU may have over a more expensive alternative.

We’ve broken down the CPUs into four levels in this list to make things easier: extreme alternatives, high-end options, mid-range options, and budget-friendly options. We’ve listed the CPUs in each category, starting with the most expensive and working our way down, with a concentration on newer generation processors that are still easily available. We’ve even left out several later generation CPUs (namely, Intel’s 9th Generation Core i3 processors—with the exception of the i3-9100f) because their current prices, as well as the prices of their competitors, render them obsolete.

We’ve also chosen our favourite processor from each tier, and we’ve added commentary to each tier comparison chart to help you figure out which CPUs are best for certain applications.

So, if you’re looking for some help picking a CPU for a future build or update, the information below might be useful.

While a simple chart cannot tell you which processor is optimal for your needs, we have offered our top picks for each tier in the table below. These processors aren’t exactly the best-performing processors in each category, but they are a solid value for money alternative that can meet the needs of a wide range of customers.

If you’re considering a Tier 1 extreme CPU, you undoubtedly have a significant budget and are seeking for a processor that can tackle CPU-intensive tasks on a regular basis. The processors in this tier are the finest for 3D rendering, scientific modelling, design work, software compilation, and other tasks.

And, unless you’re just seeking to construct a high-end gaming PC, you can’t go wrong with any of the alternatives above if you have the funds to accommodate one of these CPUs (and the suitable hardware to match with them). If that’s the case, you may save a lot of money by going with a Tier 2 processor and getting identical results.

The AMD Threadripper 2970WX was chosen as our top Tier 1 CPU not because it outperforms the other options on this list, but because of its low price and insanely high number of cores (24) and threads (48). It’s nearly half the price of both the Intel Core i9-9980XE and the AMD Threadripper 2990WX, at just under $1,000.

Of course, if you have the funds, upgrading to an Intel Core i9-9980XE or AMD Threadripper 2990WX will provide you with better performance. Just keep in mind that the performance boost won’t be significant—especially considering the extra money you’ll have to spend to go to the higher-end options. The 9980XE and 2990WX, on the other hand, are worth considering if you have an unlimited budget and a desire for maximum performance.

If you want to save a little money without sacrificing too much performance, the i9-9960X, 9940X, 9920X, and 9900X are all good choices. The AMD Threadripper 2950X is also an intriguing choice because, for just under $700, it allows individuals on a tighter budget to have a CPU with high-end multi-core and multi-thread performance.

If you have a reasonable budget and want to build a high-end gaming machine with workstation-like performance, these Tier 2 CPUs are an excellent choice. Our preferred Tier 2 CPU is the Intel Core i9-9900K, but the AMD Ryzen 9 3900X has a strong case as well.

The Intel Core i9-9900KF, which is essentially an Intel Core i9-9900K with integrated graphics, is also worth considering. It is, however, only $10 less than the normal 9900K, and I believe that for that price, you should just get the option with integrated graphics as a backup in case your dedicated graphics card fails. You can also acquire the i9-9900, which has somewhat lower performance than the 9900K and 9900KF and cannot be overclocked, but is roughly $40-$50 less expensive.

Also Read:  What to Do if You Get a Ransomware Email

Finally, the Intel Core i5-9600K and AMD Ryzen 5 3600X serve as a bridge between the higher-end Tier 2 CPUs and the highest-end Tier 3 CPUs. These two processors are likely what you’re searching for if you can’t extend your budget to purchase one of the above-mentioned alternatives but want a performance boost over the Tier 3 CPUs listed below.

While no one aspires to be in Tier 3 in any other area of life, it is the place to be for processors. Tier 3 is currently brimming with great price-to-performance value. Because of its incredibly low price, we chose the AMD Ryzen 5 2600 as our preferred option in this class.

The 2600 is now available for little under $120, and it can be combined with a mid-range to high-end graphics card and a 1080P 144Hz display to provide a superb gaming experience.

The newer AMD Ryzen 5 3600, of course, outperforms the 2600 by a significant margin. The newer Ryzen processors, on the other hand, have had out-of-the-box BIOS compatibility difficulties with B450 motherboards, and if you want to avoid those issues, you’ll have to pay a little more for an X570 chipset board, which lowers the Ryzen 5 3600’s price-to-performance value a little.

There are B450 motherboards that guarantee out-of-the-box compatibility, and AMD offers solutions to help get past the BIOS issue. Even with that in mind, the Ryzen 5 2600 will remain a fantastic option for budget-conscious gamers and system builders as long as the price difference between it and the 3600 remains around $80.

If you don’t want to overclock and want the most single-core performance for under $200, the Intel Core i5-9400 and 9400F are worth considering. While the 9400F does not have integrated graphics, it is more than $60 less expensive than the normal 9400. So, if you’re going to acquire a dedicated graphics card and don’t mind losing the integrated Intel HD graphics as a backup option, the 9400F over the 9400 will save you a lot of money.

The AMD Ryzen 7 2700X and 2700 are also good alternatives in this Tier because they have more cores and threads than the others. While they won’t quite match the single core performance of the i5-9400, 9400F, and 3600, they should be adequate enough that you won’t notice the difference anyway.

The AMD Ryzen 5 2600X, which offers a modest performance improvement over the 2600, is also worth considering. However, it’s only $10 cheaper than the Ryzen 7 2700, and you’d be better off with the extra cores and threads for that price difference.

Finally, Tier 4 CPUs are available. The majority of the CPUs in this price bracket are AMD’s APUs, which are ideal for gamers on a tight budget.

The Ryzen 5 3400G and Ryzen 5 2400G are both more expensive than the Ryzen 5 2600, however there is a case to be made for using them over the 2600 because they have capable integrated graphics.

However, you can obtain better performance than the 3400G or 2400G by pairing an Intel Core i3-9100F (which has been available for under $90) with a budget-friendly graphics card like an AMD RX 560.

The Ryzen 3 3200G will give you a considerable performance bump over the 2200G, but it will set you back $25 extra and you’ll have to deal with the BIOS compatibility issue on motherboards with the B450 chipset.

Which CPU Tier Should You Choose?

The best processor for you will be determined by your budget and the types of jobs you intend to complete. If you’re on a tight budget and your main priority is gaming performance, a budget-friendly solution like the Intel Core i3-9100F or i5-9400F might be the best choice.

If you have a higher budget and want to create a gaming computer that can also handle multi-threaded workloads (like design work, 3D rendering, live game streaming, etc.) AMD Ryzen 9 3900X, Ryzen 7 3800X, or AMD Ryzen 3700X might be a better fit for you.

In any event, this CPU hierarchy list should help you locate the correct processor, regardless of your needs or budget.