More
Home Technology Do Streamers Use a VPN (Do You Really Need It?) 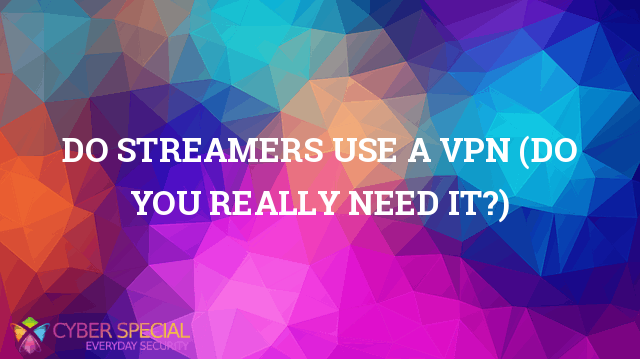 The topic of VPN (Virtual Private Network), is a hot topic in online gaming. There are many comments and posts on the topic. Subreddits also discuss the pros and cons. While some prefer a VPN to provide privacy and less restrictions and security, others feel that VPNs slow down the user experience and make it more difficult.

What about when things get a little more complicated? When your internet connection is more than just gaming, there are more factors to consider. Twitch streamers have special concerns when streaming to Twitch.

What Concerns Have Streamers

Content streamers, whether they are streaming live on Twitch, YouTube Gaming or Mixer, Dlive and Hitbox, have the same concerns as gamers. But, for streamers with thousands of followers, there’s a lot more at stake. Many streamers rely on VPNs to solve problems such as these.

An IP leak occurs when your IP address (Internet Protocol) is made publicly visible. Your IP address is the internet equivalent of your home address. It is a security risk, especially for live streaming. Everybody wants to keep their IP address private as hackers can gain access to your computer and potentially your data. Streamers should be cautious as they may become more attractive targets if they have a large following. This problem can be solved by using a VPN. The user’s real IP address is never revealed. VPNs use a virtual IP address that is linked to a server in another country or city.

DDoS (Distributed Denial of Service attack) occurs when traffic overwhelms an IP address. These attacks are sometimes called “swarming” attacks because the IP address is overwhelmed with requests. These attacks are sent or distributed from large numbers of computers because it takes a lot traffic to make this happen. This is often done in gaming to gain an advantage over another player.

Streamers face this problem because their stream is so open. Other players may want to stop them, but bad actors might just be looking for the satisfaction of taking down a large player. All that is required by perpetrators to be successful is an IP address. A VPN hides that IP address behind a virtual address.

Some streamers might find it difficult to access the best games and live streaming the rest of the world. Many countries block streaming sites such as Twitch. Streamers can use a VPN to set their location in any country to stream games and to access them.

Quality Concerns Streaming over a VPN

Both live streaming and game play require a high-quality, fast connection. How does a VPN affect streaming performance? Some streamers feel that a VPN can slow down their streaming speed as they need to connect to another server. This can negatively impact streaming quality and stream quality. Although a VPN may add latency to streaming, there are also some evidence that it can increase performance by routing traffic through more reliable connections.

Throttling by an Internet Service Provider (ISP) is another issue. Some ISPs throttle bandwidth from and to Twitch because of the volume of streams. The VPN does not allow the ISP to know where your data is coming from or going. It cannot also throttle traffic based on website. This can lead to a significant increase in connection speed, particularly during peak periods when ISPs are more likely throttle.

How to Stream Securely without Losing Speed

Should Streamers Use A VPN

Yes, and no. Twitch’s top streaming professionals take all factors into consideration when determining the best connection for both stream and game. Speed and security are two of the most important concerns. To get the best of both, streamers can choose to use a VPN or a VPN with split tunnelling.

We have some suggestions to help you narrow down your choices.

The features that streamers most need were considered when evaluating the services. Here are the top streaming services for Twitch and other sites:

Also Read:  Is OperaVPN Good for Torrenting? Is it Safe?

These are the top VPNs for streamers.

NordVPN may be the fastest of all three. It has released the WireGuard-based protocol, which is fast, modern and secure. This makes connections much quicker.

The provider offers streamers a reliable choice with a network of over 5000 servers across 59 countries. They also offer amazing speeds. It is free from DNS and IP leaks, uses next generation encryption, and offers an internet Kill Switch.

NordVPN is designed for people who wish to unblock content and access it on their entire system. Split tunneling is only available on Android or through its VPN Browser extensions.

The service was also independently audited, and it was found to not keep any logs. Security tests were passed by the apps for Android, iOS, Windows, Mac, and iOS.

NordVPN currently offers a 70% discount and a 30-day guarantee.

Surfshark offers all the essentials you need in a budget-friendly package. You can find more than 1700 servers in 63+ countries.

Split tunneling is available on both Android and Windows apps. It allows you to connect unlimited devices with one account.

It has strong AES256 encryption and an Internet Kill Switch. There are no DNS or IP leaks. It is based in The British Virgin Islands, which allows it to avoid data retention laws. They also don’t keep logs.

Shadowsocks protocol can be used to bypass restrictions on content. It allows you to unblock streaming sites including Twitch.

Surfshark offers a 30-day guarantee for all plans. Prices as low as 1.99$/month.

PrivateVPN is the best choice if you are looking for a user-friendly and robust VPN. PrivateVPN offers more than 200 server locations in 63 countries. This makes it simple to bypass geo-restrictions, and stream content from any location.

Streaming is made easy with military-grade encryption and strong data protection. Unlimited bandwidth and Unrestricted Server Switches ensure that you don’t have to worry about throttling and high ping while streaming and playing games.

The VPN is a great choice for anyone who wants to get into game streaming but does not have a lot of tech knowledge. The apps make it simple to install and allow you to switch between servers. PrivateVPN apps have many features but they are well-designed and easy to use.

ExpressVPN, a privacy-focused VPN service, is a great choice for streamers. Their servers are all RAM-disk, which means that they do not keep any logs or personal information.

Split tunneling is possible on Mac, Windows and Android apps. The router app allows you to set up the feature for each device in the network.

There are 160+ locations available around the world, which makes it easy to unblock content and websites from any location. It has a great download and upload speed which will have minimal effect on ping or performance.

ExpressVPN employs best-in class encryption and security features such as IP leak protection, Internet Kill Switch, and IP leak protection. This service allows you to connect up 5 devices simultaneously with one account.

Although the service may not be the most affordable on the market it does offer a 30-day guarantee on all plans.

VPNs are used by many streamers to hide their IP addresses for privacy and performance purposes. They use it to access Twitch and unblock games and content. Split Tunneling allows them to stream only while keeping the rest of their apps unaffected. This is a great way to get the best of both worlds. Some streamers use VPNs. NordVPN is the best VPN for streamers, offering excellent speeds, performance, and split tunneling.