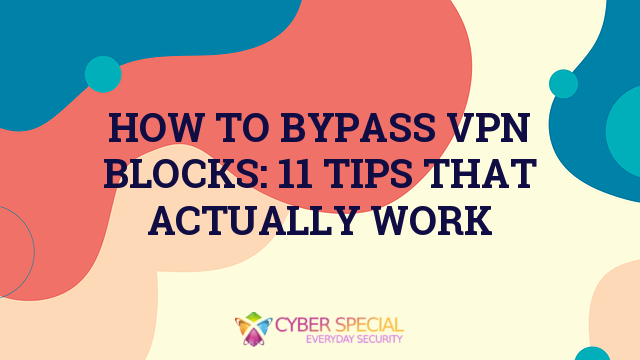 Netflix and other services began to block VPN connections in order to restrict access to location-specific content. Popular websites were blocked by schools and workplace restrictions, and internet censorship became a common reality for some governments. VPN has become the main means of internet freedom. However, VPN connections were blocked by governments and some countries. It is possible to bypass VPN blockages even though it uses sophisticated internet censorship techniques.

It isn’t as difficult as you might think. There are many ways to bypass VPN blocks. These include traffic obfuscation, changing protocols, using different ports or using additional software like Shadowsocks proxy or Tor Browser to bypass firewalls that block VPN connections.

Why do websites block VPN

Websites, governments and services like Netflix block VPNs from making content unavailable. These blocks are in place for several reasons, including legal, copyright infringement and security. They also serve as control for moral, ideological and economic reasons.

To earn their share, studios that produce video content try to enforce copyrights. Because copyrights are enforced by countries based on market conditions and the interest of viewers, popular streaming services like Netflix were forced to take legal action against streamers who violate copyrights by accessing the service via foreign servers.

This principle applies to all content, whether it is written, filmed or produced in any other way. Many streaming sites and other websites began to investigate the matter and blocked proxy connections and VPNs to their services if they found that you were not in the country you claimed to be.

Rules for school, university, and workplace

In order to avoid distractions or other offenses, educational institutions and enterprise businesses often restrict access to inappropriate content. The more practical reason for this is to secure the company’s private networks to protect financial and private information. Schools and workplaces take extra precautions to ensure that no one from the outside can infect their private networks by blocking VPNs. Institutions can reduce the chance of being infected with malware and ensure that students and employees are not distracted.

Websites are blocked in countries around the world because of their political, ideological and economic views. China is known for blocking access to popular websites such as Facebook and Google. It employs advanced detection methods in order to block VPNs.

China, Iran, Iraq and a few others have even banned consumer-based VPNs. This prevents access to information and exposes other ideas.

What VPN is blocked

There are three main ways to block a VPN connection. Blacklisting the VPN server’s IP address is the most popular and easiest method. Another option is to block the port number. The most advanced ISP and government-approved method is the Deep Packet Inspection, or DPI.

If multiple users stream to the same VPN server, for example, this can generate a lot of data. This is a red flag for Netflix-like services, and they immediately block connections that use large amounts of data.

While detection methods are not always successful, more sophisticated systems are being developed. If a stream contains certain traits that are related to VPN usage, then these connections can be blocked.

VPN providers attempt to conceal and mask encrypted traffic in order to bypass VPN block. They may use different obfuscation techniques and port numbers to circumvent the censorship.

How to bypass VPN Blocks

This is a simple trick, but it can be very useful when you need to access blocked websites at work or school. You can bypass VPN blockers by using mobile data or turning your mobile device into a hotspot. Mobile data connections are not restricted and can be used to bypass firewall rules at school or work. However, this trick will not work across the country as ISPs are subject to the laws of the country. Therefore, websites that have been blocked by the government cannot be accessed.

You might consider changing the VPN provider or server if you are unable to circumvent the VPN ban on Netflix. So that streaming services can be used, the best VPN providers monitor and renew their IP addresses. It can be difficult to switch to the right server, as there are many options. It’s also possible to unblock such websites using a VPN provider.

3. Modify the VPN protocol or port

It is much easier than you think to change a VPN protocol number or port number. You can almost always select the options from the application’s settings screen. Some VPN protocols, such as PPTP and IKEv2, use ports that are easily blocked by a firewall. OpenVPN TCP and SSTP protocols are the best options. They use a common, widely used port 443 (SSL/TLS), which is rarely blocked. Advanced users can configure VPN apps to use ports 2018 41185, 443, or 80.

4. Use a VPN with stealth or obfuscation tech

The best VPN providers have incorporated a feature that obfuscates and masks VPN traffic to make it easier to use. The stealth option allows connections to bypass VPN blocks, and prevent detection by DPI techniques. These features can be used to bypass firewalls in countries such as China and the United Arab Emirates. This setting can slow down internet speeds, but it is worth trying if you are in a restricted area.

5. Use a VPN server or dedicated IP for your needs

Many websites and services can easily identify the huge data usage or multiple connections coming in from the same IP address. VPNs offer dedicated IP addresses which assign an individual IP address that is only for you. This static IP addresses can be used to circumvent data usage detection systems. The traffic appears like regular, single-user traffic.

You can install the Tor browser on your device. It is focused on security, and allows internet traffic via the Tor network. It is set up so that your IP address changes at least three times before it reaches the destination. This masks your true identity, allowing you to surf anonymously. It is possible to bypass internet censorship because the last IP that leaves the Tor network changes every fifteen minutes.

7. Obfsproxy is a good option.

Another tool developed by the Tor Project, Obfsproxy can be used to stealth OpenVPN traffic. Although this tool is not 100% effective in bypassing VPN blocks, it was designed to avoid detection by DPI techniques. Although Obfsproxy is easy to use, you will need to know how to run a few commands to make it work.

Shadowsocks was developed in China, and is therefore illegal to use. China’s Great Firewall uses DPI techniques to identify VPN protocols. VPNs can sometimes be blocked even with the use of obfuscation technology. Shadowsocks works in a similar way to VPNs, but does not conceal any online activity. It uses SOCKS5 protocol to route traffic to a proxy server. Shadowsocks traffic looks just like HTTPS traffic.

Shadowsocks does not hide your identity, it encrypts VPN traffic and stealths it. Although this is the best way to bypass VPN block implemented by governments, it can be difficult to set up. To make it work, you will need a Shadowsocks proxy server that is not located in the restricted area. Surfshark is a VPN that provides Shadowsocks protocol right out of the box.

Secure Socket Layer/Transport Layer Security protocols use a commonly used port 443. To make it impossible to detect that a VPN has been used, SSL tunnel routing traffic adds extra encryption to encrypted VPN traffic. This tunnel can be made using a program called stunnel. It is not easy to set up, so you will need to do some research.

SSH (Secure Shell), is used to transfer files from and to a server. It’s most commonly used in Unix systems and windows using a popular program called PuTTy. It is similar to SSL but requires command-line knowledge.

Another open-source program that uses VPN, SSH, and HTTP proxy technology is called OpenVPN. It can be used to bypass VPN blocks or internet censorship. Psiphon can be used on Windows and Android. Psiphon is easier than creating your own SSL and SSH tunnels. It has an easy-to-use interface and a comprehensive guide that explains how to use it.

There are many ways to bypass VPN blockages, from the easiest to the most difficult. You can use mobile data to unblock websites at school or work. Tor Browser is also available. You can unlock Netflix and Hulu services by using different protocols, a dedicated IP or changing the VPN server provider. To bypass firewalls and other sophisticated VPN detection techniques, advanced methods like Shadowsocks, Psiphon or creating your own SSL tunnels can be used.