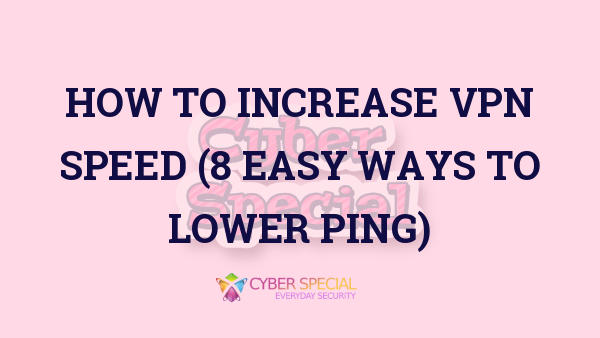 VPNs don’t all have the same speed. Some VPNs may be faster than others because they use better routing routes than your ISP. It all depends on what settings you select. There are many ways to increase your VPN speed if you experience lag or low-ping.

Let’s first look at how VPN affects your internet connection.

Is VPN slowing down Internet Speed

How to Speed Up Your VPN Speed

These simple tips will help you get fast internet when you connect to a VPN.

Connect to the Nearest VPN Server

Your internet speed directly depends on how far you are from a VPN server. Distance from your actual location will affect the speed of internet connections. It takes longer for packets to travel if the server is farther away. Large distances can slow down your connection, cause lag, or increase latency.

Let’s suppose you are in the US and want to visit a local site, but you have to connect to a VPN server that is far away. This creates a long round trip for your connection. This can increase connection times, decrease download speeds, and even cause timeouts.

You can get the fastest speeds with a VPN if you connect directly to the server closest to you. It’s fine to connect to the country that you reside in. A VPN provides the same security and privacy as any other connection.

You must connect to a country in order to gain access to restricted content. To get the best results, choose a region or city that is close to you.

Switch to the Least Loaded Server

Server loads are created when many people connect to the server. The server must process all data that passes through it with its limited resources. These resources cannot be accessed immediately by a VPN server.

Loading servers cause all data to be held in a queue, which delays them. This is what causes a slow internet connection when using a VPN.

VPN providers may place bandwidth limits to manage increasing data transfers. This can help ensure that all users connecting to the server have a seamless experience. The best VPN services don’t limit bandwidth. Speed is crucial for stable VPN connections.

Connect to the server that is least used to speed up your VPN connection. It is possible to switch between several servers until you find one that works best. Many people can eventually connect to the same server, slowing it down. You can also change the settings frequently to get the fastest speeds.

Some ISPs may also be able to restrict traffic based upon the protocol used. Although it is unlikely that an ISP will throttle VPN traffic, it could happen in certain countries.

It takes longer for encryption to work because it is stronger. VPN speeds may be significantly slowed down by complex configurations and algorithms.

WireGuard is the most recent and modern VPN protocol. WireGuard is not only strong encrypted but also the fastest.

You can also switch between UDP and TCP protocols. Many VPN apps default to UDP.

You can also speed up your speed by using IKEv2, L2TP and SSTP protocols.

A PPTP protocol can be considered the fastest but least secure. Its security is compromised, so you shouldn’t use it to protect your privacy.

Your device is one reason your VPN may be slow. Your smartphone or PC uses CPU power to encrypt/decrypt VPN connections. A slow CPU can cause lag and make the process more difficult.

Some CPUs are equipped with an encryption accelerator. These devices are fast and almost invisible in encryption.

Your router may also be a factor. Old routers may not have the necessary processing power to provide adequate bandwidth. The VPN can be set up directly on the router, so the encryption time could increase because of a lack of resources.

Many VPN providers offer a second or multi-hop VPN feature. It routes your internet traffic to a VPN server and encrypts it twice. It can increase your privacy but it will slow down your internet.

Masking VPN traffic is another common feature. This feature is useful in situations where VPNs are blocked, throttled or blocked. This feature allows you to bypass restrictions in countries such as China and the UAE. It does not slow down your VPN traffic, but it can make it harder for others to see. It is not recommended to use it unless your VPN traffic needs to be blocked by censorship.

For good speed, it is best not to use any additional features than a standard VPN.

Switch to a Faster Vpn Provider

Each VPN provider offers a unique network and different app configurations. It may be slower due to different operating systems, technologies, and hardware.

Unlimited bandwidth and high speeds are the hallmark of the best services. You might be experiencing slow speeds from your current provider.

Fast server networks are available for services like NordVPN and Surfshark. Some have unlimited P2P traffic and the fastest WireGuard protocol. All these providers offer a 30-day money back guarantee.

Consider upgrading to a higher-speed internet subscription if you are currently on a slow internet connection. Your internet speed will be slightly reduced by using a VPN, making your limited plan even more frustrating.

Use a Wired Connection

Wi-Fi and mobile connections over a VPN might not work as well as a cable. It is possible that the router’s signal strength may not be strong enough to provide stable VPN connections. Optic fibers are the fastest and most reliable medium, but they can have a negative effect on your internet speed.

A strong signal and high bandwidth are essential for a VPN to function properly. This is necessary to maintain a connection with a server. You will get better results almost every time you switch from Wi-Fi or mobile to a direct connection.

How To Test Your VPN Connection Speed

It’s very simple to check the VPN speed. You only need to connect to a VPN server to run these speed tests. These tests will show you latency (ping), upload, and download speeds. Speedtest.net is a great way to test VPN speed.

After you have completed the test with the VPN turned on, disconnect the server and try it again. This will show you how slow your connection is without and with a VPN. The speed tests can be performed on the same server so they may be more accurate.

Without VPN, local speed is not affected

Europe to the US without VPN

Europe to the US with VPN

VPN speeds depend on how far you are from a server, the load it has, and the encryption protocol being used. Your device’s capabilities and the configuration of your server network also play an important role.