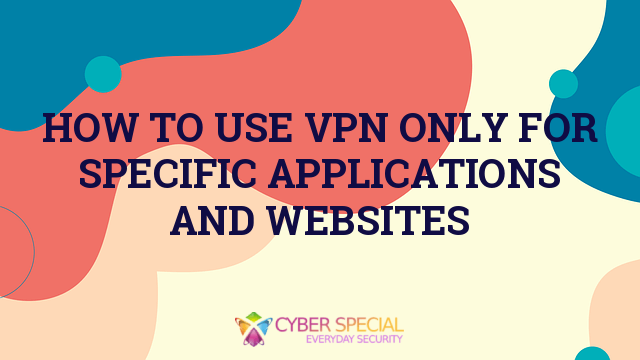 Your VPN can keep your online privacy and security private. Some VPNs offer a limited solution. All traffic is routed through standard VPN connections. However, you may want to use your VPN to access specific apps or websites. Split tunneling is required for this.

These are just a few reasons why split tunneling might be necessary. Split tunneling is a good option if speed is more important that security. VPNs can slow down your speed and increase latency. If you have to access network resources such as files or printers, it is possible to bypass VPN. You might need to bypass VPN in certain situations or for particular sites.

You can switch off your VPN temporarily. But it can be more difficult if you want to use the security of VPN but also have access to an open network. Split tunneling is the solution.

Split Tunneling is Only for Some Traffic

Split tunneling is an option of some more advanced VPN services. It allows you to use your VPN for certain traffic only, such as for one program or certain sites. You have the ability to control which traffic you want to encrypt and transmit through your VPN, and which traffic you prefer to bypass it and travel over your open network.

How to use VPN only for specific applications

VPNs may have the ability to be used for specific applications. You can choose to “whitelist” certain apps from which VPN tunnel should be blocked. The VPN tunnel will carry all traffic. Split tunneling is particularly useful for apps that rely on the local area network, or require access to local network resources.

Use VPN only for browsing

VPN Use for Specific Websites

Split tunneling cannot be used to whitelist websites because VPNs restrict access by application. Surfshark is the only exception. It can whitelist specific sites and IP addresses using the VPN software.

Through the settings, the user can choose which websites should be bypassed by the VPN. This is especially useful for sites that use IP addresses or location as security protocols. These sites may be accessible via your open network.

A Private Internet Access browser extension is also available, which does a different job. This allows you to block certain websites from using VPNs, but all traffic will remain encrypted. This is known as reverse split tunneling.

Split tunneling is the most popular type. It excludes some traffic from passing through the VPN tunnel. To bypass the VPN, the user can specify an application, an IP address or any other criteria.

Split tunneling is a popular way to download torrent files. Some users prefer torrent files to be encrypted and hidden from prying eyes. They also want to be able to surf the internet with ease and speed through their open network.

This practice is controversial. Although internet service providers won’t be able see torrent traffic, other browsing traffic and unaccounted data may reveal what the user is up to. It is possible to make assumptions by visiting torrenting sites and hiding torrent downloads using VPN. These assumptions cannot be supported without hard evidence.

Split tunneling is not possible on all VPNs

Split tunneling is an option you may need. This allows you to use your VPN for certain applications only or for some traffic only. Make sure you check that the provider you select offers split tunneling. It is also important to ensure that it is available on your device.

Conclusion: Use VPN to Access Specific Apps and Websites

There are many great VPN services available, so you can be sure that there will be one that suits your needs and budget. Split tunneling is not something that many users need to consider. Users can leave their VPN turned on all the time and only turn it off when they need to access an app or website via an open connection.However, advanced users such as streamers, gamers, uTorrent users and others who rely on local network resources may need to ensure that their VPN offers these features. It is also important to ensure that your VPN works on all devices.