More
Home Technology Is Surfshark Good for Torrenting in 2021? 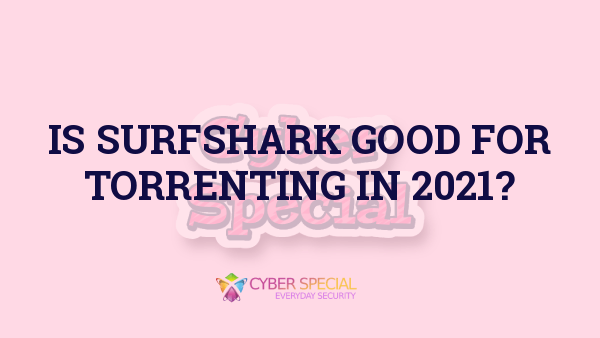 Surfshark is a top VPN on the market. But how well does it do torrenting? We did our research and reached out to the representatives to find out how Surfshark handled torrenting.

Surfshark supports P2P traffic via all 3,200+ servers. This makes it simple to locate servers close to you and avoid overcrowding them.

P2P servers usually have a dynamic IP that changes each time you connect. Surfshark offers a variety of P2P servers that offer static IPs. This is an address that never changes.

Surfshark is good for torrenting

Surfshark makes torrenting easy, simple, and secure due to its many features.

We ran some tests to see how fast Surfshark torrenting is. We used qBittorrent, uTorrent, servers from Canada, Singapore and Japan, as well as the WireGuard protocol. Our tester is from Romania, for reference.

These are the speeds for the other servers

It’s not surprising that there was a slowdown. Servers were located far away from the location of our testers. It took data longer to travel from their device to the VPN servers. WireGuard’s lightweight meant that the encryption made data packets more heavy, which in turn took longer to arrive.

The download speeds were satisfactory. To speed up the downloads, we also used a VPN server located near the tester (Bulgaria). Speed improvements were noticeable at 18-19 Mbit/s (qBittorrent), and 7-9 MB/s for uTorrent. A 33.92 GB file took us around 40-45 minutes on qBittorrent and about 1 hour 40-50 on uTorrent.

While connecting to the Bulgarian server, we also used OpenVPN. We experienced slower speeds than expected: 8-12 MiB/s for qBittorrent and 1-2 MB/s for uTorrent.

IMPORTANT If the torrent has very few seeders your download speeds may be very slow. Surfshark is not responsible for this. This is because you are downloading torrents from only a handful of people. Your download will stall if you don’t have seeders.

What do people think about torrenting with Surfshark.

To find out what torrent users thought of Surfshark, we checked several Reddit threads. Reddit users also had their opinions on Surfshark’s torrenting experience. This is the best place to get unbiased opinions. We tried to find reviews on torrent client forums but couldn’t find any worthwhile.

It seems that people are satisfied with the VPN. They experience no major slowdowns and Redditors reported that they have never received angry letters from copyright agencies, trolls, or trade associations.

Surfshark has 2 drawbacks for torrenting

Surfshark can be a great VPN for torrenting, but there are two problems.

1. Seeding is not allowed

Surfshark does not allow seeding. This includes P2P servers. We also had very slow upload speeds when torrenting. There were exceptions to this rule on uTorrent but upload speeds were slow (3-4 kB/s).

2. Port forwarding is not available

Surfshark does not allow port forwarding as it regards it as a security risk. They are concerned that hackers could exploit random ports by opening up ports.

Port forwarding is a popular option for torrent users because it allows them to connect with more peers. This theoretically means that you will get faster speeds. However, this is not a guarantee.

Does Surfshark Still Make a Good VPN for Torrenting?

Yes. Surfshark works well for those who only occasionally download movies, TV shows, or games. If you have to keep a high seed rate or download torrents frequently, Surfshark is not recommended. You can use Seedbox.io instead.

Surfshark: How to Use It for Torrenting

These are the most frequently asked questions about Surfshark or torrenting.

Yes, you can – here are some things to try:

Does Surfshark Limit Your Data?

Surfshark does not limit data usage between downloads.

Yes, you can. You don’t have to. Surfshark’s kill switch is very powerful and protects you against traffic leaks.

You can do it by searching “[torrent name] + binding IP”.

It is one of the most secure torrenting VPNs available. Here are the reasons:

Surfshark’s IPv6 leak protection is not great. You can fix this by disabling IPv6 manually on your device.

What happens if you Torrent on Surfshark’s Non-P2P servers?

This was done by torrenting over the Australian and New Zealand servers. We got either zero speed or very slow speeds (kB/s, not MiB/s and MB/s). Surfshark’s servers for P2P are better.

The closest P2P server is the best. This will allow you to get faster speeds as data packets travel more quickly between you and your VPN server.

Surfshark support representatives were asked if they had a recommendation for a particular P2P server. They said that they just recommend the closest one.