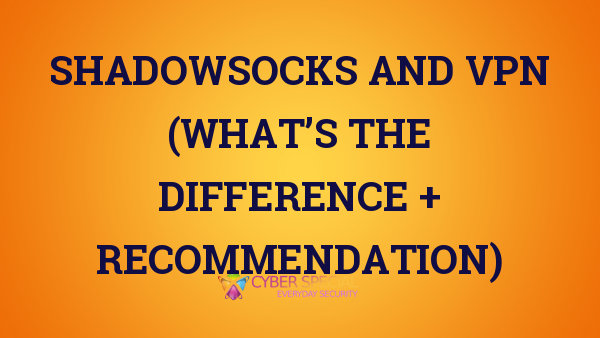 People mistake Shadowsocks more often for VPN-based technology. While they share some similarities, they are two completely different technologies.

Learn more about the differences and similarities of Shadowsocks and VPNs. This article also contains information on the benefits and uses of both technologies.

What is a VPN?

To enhance privacy, a virtual private network (VPN), is a network architecture that users create over a public network. This technology allows users to create a separate network and hide their internet protocol (IP) address. It gives them anonymity and privacy online. VPNs hide the IP address of a device, making it impossible to trace online actions.

Shadowsocks, an open-source SOCKS5 project that bypasses censorship, is called SOCKS5. Shadowsocks was first created by a Chinese programmer in 2012 to bypass China’s content geo restrictions. The Chinese authorities made it clear that the developer was resigning from the project in 2015 due to pressure.

Nikhil Sonnad and Josh Horwitz wrote that China has intensified its crackdown on virtual private network (VPNs), and other tools such as Shadowsocks. Apple pulled Shadowsocks and VPN apps from its Chinese app shop, denying many Chinese citizens the tools they need to circumvent China’s Great Firewall. China was the least free country on the Internet freedom scale (the right to access the Internet and the ability to have digital freedom). It scored 10 percent.

Lucky for us, the open-source technology has been maintained and improved by a variety of contributors since then. The spread of Shadowsock is unlikely to be stopped despite the government’s efforts to stop it. Shadowsocks is maintained by employees of some of the most prominent tech companies. Developers have also added custom features to third-party apps.

Shadowsocks: How They Work

Shadowsocks uses proxying technology, which became popular in China following the Great Firewall’s inception. By linking to a proxy server, users could bypass the firewall. This setup allows the user to freely connect to blocked websites by routing all traffic through a proxy server that is located at a different location.

Proxy servers were becoming more difficult to use to connect to restricted websites as the Great Firewall became more common. This tool can block traffic from certain routes and identify them. Shadowsocks was created by coders to establish an encrypted connection between Shadowsocks client and proxy server.

Shadowsocks uses a virtual private servers (VPS), where users connect to their computers and the software’s code. Shadowsocks clients (free and paid) are used to enter the server location and password. This allows users to browse the Internet freely and without restriction.

Also Read:  5 VPN protocols you need to know about

Shadowsocks is an open-source, free software that can be used in multiple computing environments. This includes mobile devices and wireless networks. The tool is also available for all platforms including Windows, Linux and Mac as well as Android, iOS and OpenWRT.

The Shadowsocks global community is dedicated to providing bug-free code as well as long-term support. The tool quickly became accessible to many platforms and languages with an increasing number of users since its inception. Many businesses, such as Google, specialize in creating apps and APIS using Shadowsocks services.

What are Shadowsocks’ and VPN similarities?

Globally, 43 percent feel they don’t have control over their data. This forces them to look into anonymity tools. Interestingly, 80 percent of Americans and Chinese citizens are worried about their governments spying. Over 91 percent believe that they are unable to control the way their data is used.

VPNs work in a similar way to Shadowsocks. They encrypt and redirect data to provide privacy and anonymity. Both technologies allow users to access restricted websites through government geo-blocks or authority censorship. A VPN solution alters the public IP address of users to bypass geo-restrictions. Shadowsocks and VPNs can be used on multiple platforms, including mobile devices.

What makes Shadowsocks different than a VPN?

Shadowsocks is “Distributed”, VPN is “Centralized”

What is the difference between these two technologies? VPNs are centralized services that provide extensive, centralized services. This is in contrast to Shadowsocks which are highly distributed. This architecture makes it possible for authorities to block VPN service providers’ traffic. There is no evidence to date that any security device, even the Great Firewall can stop Shadowsocks.

Shadowsocks software allows users to selectively mask certain parts of their online traffic. Other traffic can continue as normal traffic even though proxy technology is not running. Shadowsocks can only be used if the user has configured a program to use it. You can configure your browser to forward traffic via a proxy. The proxy will only work for that program. All other applications will continue to function normally. This is useful if the user wants to access certain sites from a restricted location. Shadowsocks can be set to hide the user’s details when they connect to blocked sites. This allows them to switch easily to other sites without having to turn off the tool.

VPN services, on the other hand, assume that a client is not in the region and block all requests for local content. All programs can work with the VPN tool that users run within the system. VPNs allow you to automatically accept all traffic from any program in the system, unlike Shadowsocks which only allows for TCP and UDP data transfers through a proxy.

VPNs rely on the most popular Internet protocols to instruct digital devices how to communicate with each other over the internet. Firewall censors use advanced machine learning (ML), to match fingerprints that identify traffic from VPNs using these protocols. VPN blockers are used by primary streaming services such as Netflix to limit the number of VPNs that can access them.

Shadowsocks is less centralized and therefore the ML detection method is not as effective. Shadowsocks lets each user configure the setup. This means that not everyone uses the same protocol. Each Shadowsocks user can customize their content and create a proxy connection that appears different from the outside. It is very difficult to identify traffic within this architecture for security systems.

Shadowsocks was created by developers as a tool for by-coders. Some non-professional programmers in China use Shadowsocks to access blocked sites such as YouTube and Vimeo. Google Jigsaw created Outline, which is a Shadowsocks-based program that makes it easy to set up Shadowsocks without any command-line knowledge. Outline can deploy Shadowsocks servers to multiple cloud service providers including Rackspace and Digital Ocean, Amazon EC2, Google Cloud Platform, and Amazon EC2. Shadowsocks can bypass website restrictions but it only has limited functionality. The developers have not optimized Shadowsocks for online security.

Contrarily, VPNs have the advantage of reaching many users which makes them profitable for business. VPNs offer a greater level of security than Internet usage demands. VPN can be used to surf securely on public Wi-Fi hotspots. VPNs protect your online identity from ISP-related problems like data logging or monitoring. It is evident that there are many VPN vendors. Users should ensure that they do their research before installing a VPN.

VPNs use several layers of military-grade encryption protocols in order to conceal information on servers. Shadowsocks, on the other hand, is lightweight software that renders data invisible to make it look like HTTPS. This allows online activity to be disguised. Shadowsocks uses SOCKS5 proxy servers that can be used with multiple TCP connections to transmit traffic. This makes it more difficult to detect and faster. Shadowsocks does not encrypt data like a VPN and it does not forward requests to a specific server. It uses HTTPS5 and SOCKS5 protocols instead to hide some users’ traffic. The traffic is routed through a server to conceal online actions from an ISP. Shadowsocks encrypts traffic that it sends to the proxy server. This is only limited to UDP and TCP data packets.

Shadowsocks is completely open-source and freely available. There is a large community of programmers and testers who offer incessant support and maintenance for Shadowsocks. It is expensive to run a reliable VPN service, which includes user support, a global server network, and client app integration. VPN service providers make their money from subscriptions. Shadowsocks can be a great alternative to VPN service providers if the cost of VPN solutions is too high for you.

Shadowsocks are created and maintained by programmers to bypass censorship and improve privacy. To disguise traffic, the software uses HTTPs to make requests pass censorship policies and procedures.

VPN technology is used to secure inter-network connections. This tool encrypts data to prevent intruders accessing it while being transmitted. VPN is a proven and trusted cybersecurity solution that vendors provide support and documentation to enable individuals and businesses to secure their online identities and erase their digital footprints.

Surfsharkis an encrypted VPN service that uses Shadowsocks. This allows you to select this protocol from all of its apps. It can bypass censorship and unblock sites. Surfshark doesn’t keep logs of Shadowsocks and any other protocol. It is easy to use, and offers additional security features such as Internet Kill Switch, IP leak protections, and DNS leak protections.

Split tunneling and P2P traffic are supported. It can also unblock Netflix from any location. There are more than 1700+ fast server locations in 60+ countries. It can block malicious websites as well as intrusive online ads.

Surfshark offers a 30-day guarantee of your satisfaction on all plans.

More information on VPN with Shadowsocks

To maximize the benefits of VPN and Shadowsocks, innovative users can combine the two technologies. This allows them to take advantage of speed, security and anonymity. To bypass blockers such as the Great Firewall, you can set up Shadowsocks first to allow unlimited access to the Internet. You can then install a VPN to encrypt information and route traffic through secure servers to prevent cyber-attacks. The integrated architecture makes it impossible for any outsider to see what you do on the Internet. Cybercriminals can’t steal sensitive information from your networks or systems, in transit or at rest.

Shadowsocks can be used to bypass digital censorship. This technology is becoming increasingly popular in countries with significant Internet control. Despite authorities trying to block it, the technology has continued to grow due to its open-source nature. This makes it hard to detect. VPN is still a viable option for users and businesses who want anonymity, identity protection, and security online. VPNs are cybersecurity tools that encrypt data, reroute traffic through VPN providers’ secure servers and act as a firewall.

Shadowsocks doesn’t care about your privacy, security or anonymity. Shadowsocks is primarily designed to bypass restricted content, but it acts more like a proxy than as a VPN. Shadowsocks does not encrypt or mask all data and it does not redirect traffic to secure servers.

Here are some suggestions for VPNs: