More
Home Technology The difference between VPN and Proxy: pros and cons compared 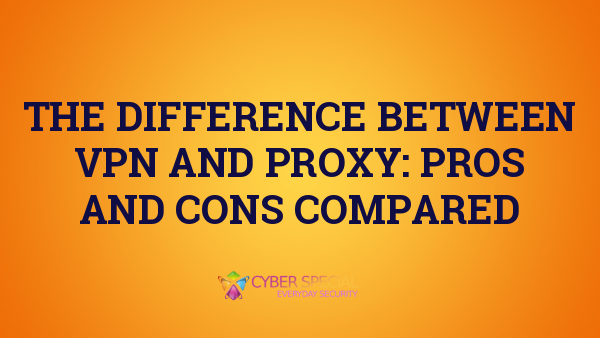 VPN and Proxy servers allow you to hide your true IP address and hide your location, but that’s just one common thing between those two technologies. They serve similar functions, but the main difference between VPNs and Proxy servers is their attention to the real-world problem that they are solving.

HTTP Proxies only work with web-based traffic. You can configure your web browser so that all of your browser traffic is routed through this proxy. This proxy can be used for web browsing or accessing geo-restricted website.

These proxies do not limit web traffic like HTTP Proxies. They still work at the application level. You can set them on an app like a game, torrenting, or video streaming platform. They have a higher load and are generally slower than HTTPS proxy servers.

These proxy servers are unique from the other types because their users don’t know they exist. They can be used by employers or parents to monitor the user’s online activities or to filter out and restrict access to specific websites. Sometimes they are used to cache websites and reduce loading times.

Now when having an idea that a proxy is a gateway between the user device and the internet, let’s talk about a VPN since it actually acts as an intermediary as well, but with one huge difference.

What does a VPN do?

A VPN creates an encrypted data tunnel between your device’s local network and an exit node (a VPN server) in another location. For example, you could be browsing in California and have an exit node (a VPN) in London. You would be able to browse the internet in such conditions.

Let’s take a closer look at how VPN works. When someone browses on Wi-Fi networks, data is transmitted over the Wi Fi network. The data is encrypted by a VPN, which makes it unreadable. VPN secures personal data, especially when on a public Wi-Fi network – it will prevent any other people on the same network from eavesdropping on your internet activity.

VPNs can also hide search history from an internet service provider. VPNs associate web activity with the VPN server’s IP address and not the internet user’s. VPN service providers typically have servers in multiple parts of the world. Therefore, search activity from network users may appear to originate at any of these locations. Thus, even if the search engines track the search activity of the network user, they will associate the information with a different IP address than the user’s original one.

What are the main differences between VPNs and proxy servers?

Both Proxy servers and VPNs achieve the common goal of hiding the user’s IP address from the website they visit when acting as an intermediary. They may appear quite similar when seen from this angle, but this is their only shared feature.

These are the key differences between VPN servers and proxy servers:

VPNs encrypt data from network users and make it impossible for anyone else to access the same network. VPNs are extremely secure when handling sensitive data.

Proxy servers, however, don’t encrypt data sent to them by network users. Proxy servers allow the user to gain access to the information from the website or application that they want by acting as a manin-themiddle. They use the URL that the user has entered to connect to the site, load the content, and then pass the information to the user to browse it.

Not only proxy servers do not encrypt the traffic between the computer and the proxy server, but they also do not typically strip away identifying information from the user’s transmissions beyond the simple IP swap. Proxy servers offer no additional privacy or security features.

Proxy servers allow anyone to access the data stream. This includes your government, ISP, proxy server administrator and any other person who has access to it. Also, some exploits such as Java Script elements and malicious Flash in the user’s browser can still reveal the true identity of the user.

2. While VPNs can be configured across the entire network, proxies can only be used within an app.

Important to note that proxy servers are usually configured with one application, such as a browser. They do not route all traffic across the entire system through the intermediary server like a VPN.

VPNs require encryption to protect your data and may slow down the connection speed of proxy servers. You have many options to increase your connection speed and browse speed. VPN speed is affected by factors such as distance, server loads, encryption type, etc. VPNs can speed up your internet by bypassing bandwidth throttles and allowing for efficient routing through advanced network architecture.

4. VPN connections are safer than using a proxy.

VPN is all about data security and maintaining a stable VPN connection to prevent information leakage. VPNs are equipped with better hardware and server configurations than Proxy servers. These servers are maintained in order to minimize the possibility of system breakdowns.

Also Read:  Can a VPN Hide your identity on social media?

5. VPN is often paid, but most proxies can be used for free.

VPNs require advanced configurations, maintenance and proper hardware. VPN services typically have monthly subscription fees that are as high as a cup o’ coffee. Some providers offer free packages, but they often limit data. This is because it is not enough to stream a full-length video. Proxy servers and VPNs have different performance, which can impact the price. Proxy servers pass the user’s information along, there is no bandwidth cost incurred when using proxy servers. VPN servers use more bandwidth and power because of overheads associated with encryption protocols.

Comparison of VPN and Proxy: The pros and cons

A proxy server or VPN server can be used to allow you access websites that are blocked in your area. The basic proxy server options are free and can be used in nearly all computers, but they are not the best for privacy, thus is not advised to be used when dealing with any sensitive data or when you don’t want to be tracked online.

VPN is always better when you are looking at long-term browsing and when dealing with private online activities. VPNs offer anonymity and security, as well as additional protection to ensure your safety. VPNs allow users to securely transfer money and personal data over public networks.

VPNs are usually only a few dollars per monthly and offer better privacy and accessibility. You should be careful when using free VPN services. Paid VPN providers offer better gateways, unmatched speed, proven security, free software, and some of them – strict no-log policies.