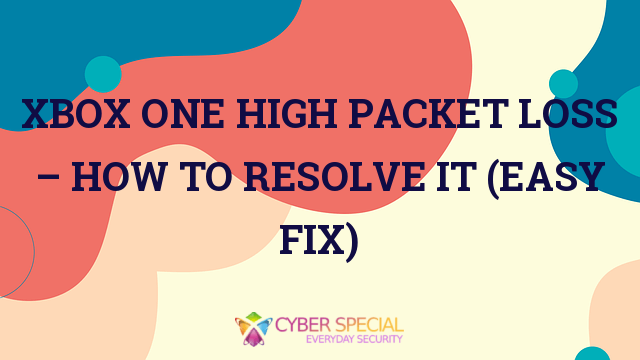 Online gaming on Xbox One allows you to play against other players, have fun with friends, and meet new people. This experience is not without its challenges. One of the most frustrating is packet loss.

Your gaming session will be more difficult if you have a higher packet loss. What can you do if your session is lagging or crashing?

Manually fixing the problem of packet loss can be done by restarting your router, customizing user settings, and resetting your Xbox. If your schedule permits, you may also want to avoid gaming during peak times. You can also use a VPN to reduce packet loss and have a more stable connection.

What is Xbox One High-Packet Loss?

You are constantly exchanging data packets (packets), with the server that you access when you play online games or stream content via your Xbox One console. A packet loss is any data that doesn’t reach its destination. Packet loss can be a serious problem that can disrupt your connection and cause you to experience frustration in gaming. High packet losses can occur in many ways:

Network congestion is the main reason for high packet loss on Xbox. This means that the network is unable to handle user traffic and loses data in transit to prevent the entire network from collapsing.

Loss of packets can occur due to network congestion, improper configuration, and server-side leaks.

The user can also be responsible for the problem. An issue with your connection can be caused by poor signal or cables, network interference, and dropped data packets between your console’s game server.

Why do I have Xbox One High Packet Loss when connecting to a Wired Connection.

If your Xbox One experiences high packet loss, it might not be your network connection. It could be the hardware. An unreliable router could cause delays in your network and slow down your connection speed.

What’s a Good Packet Loss on Xbox One?

Although no one wants to experience packet loss on their Xbox One, it is a fact that packet loss happens almost everywhere. We don’t believe there is good packet loss, but there are standards that can be used to measure the packet loss on Xbox One.

How can I check packet loss on my Xbox One?

A VPN can help you fix packet loss on Xbox One if your ISP throttles your bandwidth or your local connection is slow.

You might experience slower connections and higher ping when using a VPN to play games. This is only an issue if the server is located far from you. You won’t notice any adverse effects to your network performance if you only use servers that are close by or have little traffic.

NordVPN is a great option for gamers who are looking to use VPNs to enhance their online gaming experience. NordVPN can be used for many gaming purposes, in addition to fixing Xbox One packet losses. It can bypass ISP bandwidth throttle, unblock servers from other countries, and protect your data traffic against online threats, such as DDoS attacks.

Restarting your router or device can fix XBox One’s high packet loss. If this fails, it could mean that your ISP is attempting to throttle your gaming traffic. This is where a VPN would be the best option as it can bypass ISP throttles and prevent packet loss.

These VPNs are great for lowering ping and providing a better gaming experience.