Home Technology Does VPN work on mobile data? How much data does it use? 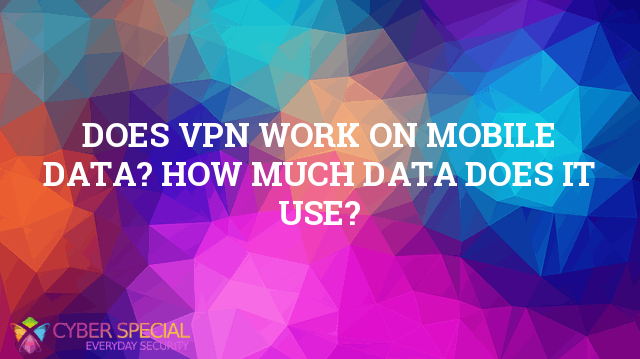 VPNs are a service that protects your privacy and can be used wherever the internet is available. This service is widely used to browse privately on your computer and mobile devices. Many VPN providers have created apps for Android and iOS. Since mobile devices can use Wi-Fi as well as cellular data, let’s check if VPN works with mobile data. What percentage of data does VPN use?

Can VPN be used on mobile data

It doesn’t matter if you have Wi-Fi or cellular data. A VPN will work wherever the internet is available. A VPN for mobile data will protect your mobile internet traffic from being sniffed or accessed by third parties.

Here’s how a VPN works on mobile data:

Your ISP owns a Mobile Data Tower Station, which connects to your mobile data connection. Next, the internet traffic is routed through the ISP’s servers until it reaches the VPN server. You can see that there are many points where your mobile connection travels before it reaches its destination. A VPN for mobile data would protect your data and internet traffic at each point until it reaches the VPN server. Your connection will then be open to the world and allow you to access your destination, whether it is a site or a file.

VPN providers offer apps for iOS and Android. These apps work on both Wi Fi and mobile data. Some might be wondering if a VPN can use more data or increase your data usage.

Can a VPN use more data

A VPN can increase your data usage. Because it needs to encrypt your internet traffic, it uses more data. This creates overhead. The VPN protocol used to connect with a VPN server determines how much data a VPN can access.

Usually, safer protocols like OpenVPN with a 256 bit encryption key may use more data that the most basic (and less secure) VPN protocol like PPTP.

To find out how much data is being used by mobile data with or without a VPN, a 5-minute Youtube video was streamed using a cellular connection. Here are the results of my network monitoring app 3G Watchdog and NordVPN.

Data consumption on mobile data, with or without VPN test results

The results show that streaming a 5-minute YouTube video without a VPN takes approximately 20,8 MB (megabytes), while streaming the same video using a VPN consumes 30,5 MB.

This experiment was intended to illustrate the overhead associated with using a VPN to access cellular data. There are many factors that could influence the increase in mobile data usage. In this instance, OpenVPN was used with 256-bit key encryption.

Which VPN protocol uses the least amount of data?

VPN protocols can vary in terms of their implementation and encryption standards. The VPN data overhead depends largely on the level of security. The less secure protocols like PPTP have simpler encryption algorithms and use less data than the ones with 256 bit key encryption.

VPN providers may use an additional obfuscation protocol to mask VPN traffic to circumvent VPN restrictions and bans. This feature will make the mobile data overhead the largest.

Also, it is worth noting that the OpenVPN protocol offers compression features to decrease data consumption. However, browsing frequently would make little use of this feature, since there’s so much data to compress. If large amounts of data are being transferred, compressing (think of it as “zipping”) will only be effective if the data is very large. This would include downloading large files or streaming entire movies (which you likely don’t want to do with a mobile data connection).

Here is the list of most popular VPN protocols, sorted by data-consuming (from least to most):

IKEv2/IPSec is the best VPN protocol to use on mobile data. It is fast to re-connect to the VPN server even when networks are constantly changing throughout the day. This protocol is popular on mobile devices. It can quickly re-establish lost connections.

How can a VPN bypass Data Caps

Although VPNs can bypass certain restrictions, they cannot bypass or increase data caps. Because all VPN traffic is routed through ISP servers, which monitor your mobile data usage, this is why. It actually counts overhead generated by VPNs towards your data cap.

An ISP monitors more than just data usage. It also tracks what services you use, such as YouTube, Netflix and YouTube. When you try to access these services, some mobile network providers may limit your internet speed. VPNs make it impossible for ISPs to determine where you are trying to connect.

Can you use a VPN when using cellular data

A VPN can be used on mobile data in the same way as Wi-Fi. It will increase your privacy and prevent any ISPs from viewing which websites you visit. However, a VPN using mobile data will slightly increase your data usage.

A VPN is a great way to travel abroad. Some websites and apps may be blocked even on cellular data. A VPN will allow you to access some of the most popular websites, such as Facebook, Youtube and Instagram.

It depends on whether you are using a VPN while mobile data is available. It would offer the exact same benefits as using Wi-Fi, privacy, security and circumventing restrictions and censorship.

If you wish to surf privately or access restricted sites while traveling, a VPN would be a great option. This creates an overhead in data usage because all of your internet traffic is encrypted using strong encryption. This may not work well if you only have a small mobile data plan. The data usage overhead also counts. Although a VPN cannot bypass data caps, it’s still a good idea for security, privacy, and bypassing censorship.