Home Technology What is a VPN Kill Switch (Should You Always Use It?) 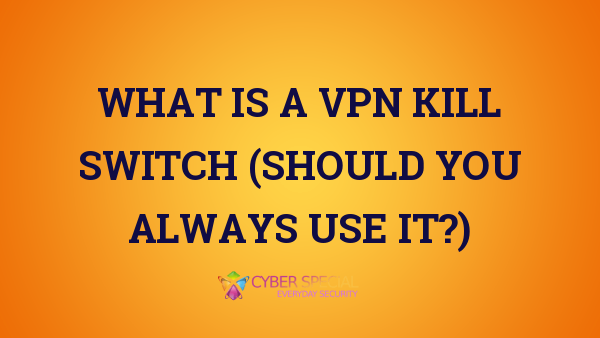 VPN services offer a feature called VPN kill button. It may not be obvious what this feature does or its purpose.

To break things down here’s an in-depth explanation of what a VPN kill switch is, and when you would want to use it.

What is the VPN kill switch?

A VPN Internet Kill Switch is an option that protects your IP from being leaked. This allows only internet traffic to travel through a VPN. If this feature is activated, the internet is immediately cut off for any accidental VPN disconnects. This feature will protect your privacy and prevent you from leaking your true IP address.

What does a VPN kill button do?

A VPN Internet Kill Switch is one that cuts off your internet connection and another that stops selected apps. Both Kill Switches will work after a VPN disconnect. This prevents the disclosure of your IP address and location. It also protects torrenting.

What does a VPN Internet Kill Switch do?

The status of your VPN connection is monitored by a VPN Internet kill switch. It detects VPN disconnects using firewall-like technology. If a VPN connection goes down, the Kill Switch firewall rules will take effect immediately. This prevents traffic from traveling to a VPN server. Once the VPN server connection is restored, the internet will work again.

A firewall is not an Internet kill switch. The Internet kill switch works like a firewall by using specific rules to block or filter internet traffic from your device. For example, on Windows, the best kill switches use a WFP – Windows Filtering Platform. This is a Windows native API that is used in all modern firewalls. The Kill Switch’s main purpose is to set up rules that immediately take effect once it is turned on.

Types and functions of a VPN kill switch

There are two types Kill Switch. Both affect your internet connection and your apps. It is commonly referred to first when talking about the Internet Kill Switch. The App Kill Switch is not used by all VPNs as it’s a secondary feature.

This is a simplified version of the first feature. An App Kill Switch allows you to choose which applications are closed during a VPN disconnect. This option is slower than the previous one and may not be as effective. While closing an app, there is still the possibility that your true IP address could leak.

Do you need to use a VPN Internet Kill Switch every time?

VPN Internet Kill Switches are great for protecting your privacy and IP leaks. Is it a good idea to use it constantly? It all depends on your online activities and preferences. In certain situations, it may be a good idea to turn it off.

Let’s see when you should use a VPN Kill Switch.

When torrenting or downloading

When torrenting or downloading files, the Kill Switch feature is crucial. Many ISPs can track your internet traffic and detect torrenting. You could face a large fine if your ISP is notified about illegal file sharing. VPN Kill Switch stops your IP being exposed, which can expose your torrenting. This is often very useful in situations where you need to disconnect from a VPN but leave your P2P application running in the background.

Sensitive data should not be handled

When you browse on public networks at airports or cafes, your data may be monitored. If you work with sensitive data, a kill switch can prevent data breaches. It would allow files to be transferred only through a secure connection.

The feature should always be turned on if you are concerned about privacy. You should also make sure you’re okay with being without an internet connection while a VPN is disabled. It can be a hassle, but it may be worth it for privacy reasons.

Use a VPN Kill Switch whenever you stream on any platform. Inadvertently dropping a VPN connection can expose your location. You should also protect your IP address when streaming via P2P platforms such as Popcorn Time. Sometimes streaming movies from these sites can be illegal torrenting.

You can find specific apps that you want to stop using.

Sometimes you may want certain apps to close down when VPN disconnect is occurring. An App Kill Switch can accomplish this. This is useful for torrenting and working with sensitive data. App Kill Switch may not be as effective as the Internet Kill Switch. It is considered secondary.

Why There’s No VPN Kill Switch on iOS

iOS is a closed platform that has many restrictions. Apple limits certain functionality of the platform for security reasons. VPN app developers need to be able to navigate these restrictions. This means that not all features may be possible to develop on every OS.

A feature called “Always-on VPN” was available for both iOS and macOS. Although it was somewhat similar to a VPN kill switch (but not exactly), When a connection was lost, this feature would automatically reconnect to the VPN. However, it did not stop traffic incoming and outgoing from the VPN tunnel.

How to test the kill switch of a VPN

Because a kill switch requires a random VPN disconnect, it is difficult to test. There are basic and more advanced methods to reproduce such a scenario.

Here’s how to test a VPN kill switch:

A sophisticated way to test a Kill Switch

You will need to have some knowledge of networking in order to test the kill switch feature. WireShark is a free network monitoring tool. We won’t go into the details of how to use this software.

WireShark offers some guidelines on how to test a Kill Switch.

VPN kill switches are an advanced VPN feature used to prevent an unplanned disconnect from your VPN server. A kill switch could make your IP address, personal data, and location public.

This feature should be used when torrenting or dealing with sensitive data. Kill Switches are an excellent feature of some VPN services. These are just a few: