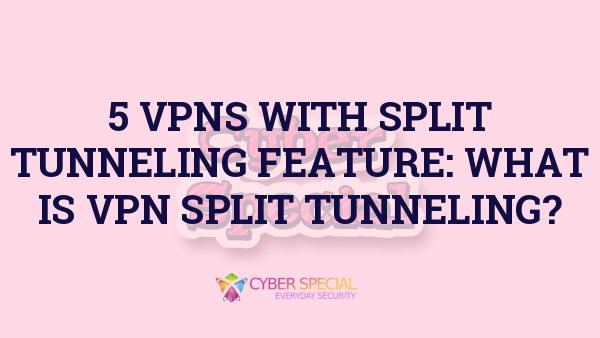 Are you looking to download securely and privately without slowing down the network? You might stream content online often and want your connection to be private and secure. VPNs can provide unrestricted access to global content and excellent security features. VPNs can increase ping and decrease network speed when connected to distant servers.

These are the top VPNs that offer split tunneling.

What is VPN Split Tunneling?

Before we get into the details about how it works and the pros and cons of it, or if it is even necessary, let’s start with the basic question: What is split tunneling? Split tunneling is a VPN feature which divides your Internet traffic.

You can run two networks simultaneously with split tunneling. Split tunneling allows you to send a portion of your connection through a VPN tunnel, and route the rest through your local network.

This is different from the default option that connects to the Internet via one connection. This is a great feature that you should have. It allows you to get fast internet and protect some of your traffic.

Split tunneling can be described in three main ways. These are the three main methods of splitting tunneling:

Split tunneling, like any VPN feature, has its pros and cons. Let’s start with the best benefits of split tunneling.

Split tunneling offers a very user-friendly experience. Split tunneling is very convenient because you don’t need to disconnect and reconnect your VPN every time you switch connections.

You can, for example, download or stream something using VPN split tunneling connection.

At the same time, stay connected to your local network and enjoy a full-speed browsing speed.

You can also enjoy enhanced security and performance, as well as the previously mentioned advantage. You will experience faster network speeds and less latency than if you were connected through a full tunnel.

This will reduce bottlenecks and allow you to route only a portion of your connection. You’ll have a better connection overall because neither your VPN nor your local connections are sent entirely through the same server.

We’ve already discussed the benefits split tunneling can bring your network. It’s only fair that we also look at the negatives. Here are the top disadvantages to split tunneling.

Not as Safe as a Full Tunnel

Split tunneling is not the best option if privacy and security are your main goals. There are security issues associated with VPN split tunneling that you need to be aware of. This can expose your sensitive information to hackers who want to dig deeper.

Let’s say your VPN split tunnel or local connection is compromised. An attacker will be able track the network back to your computer easily. Split tunneling can be as dangerous as full VPN tunnels because it allows for more privacy and has the potential to open backdoors.

Often Time-Consuming To Set Up

It can take a long time to set up the settings and permissions depending on the type of split tunnel you use. It will be up to you to decide which URLs or apps you want to use through the split tunnel, and which through your network that is unprotected.

How to Use Split Tunneling

Now that we have a better understanding of split tunneling and its workings, we can move on to the crucial topic of how to use it. We’ve summarized the essential steps to make this process easy and smooth. We believe NordVPN to be the best VPN for split tunneling. In this article, we will show you how to split tunnel with NordVPN.

These steps are the same regardless of which one of five VPNs you choose to use. Let’s now look at how to use split tunneling VPN.

NordVPN supports 5,200 servers across 59 countries. There are no bandwidth or speed restrictions on NordVPN servers. All servers are RAM-based. The NordLynx protocol is also available. It’s arguably the most efficient protocol.

Also Read:  Can You Get Caught for Illegal Streaming?

NordVPN places a strong emphasis upon security and privacy. The service is located in Panama. It has a strict customer privacy policy. They do not collect any user connectiondata, and they are frequently audited by independent auditors. NordVPN has a security solution called CyberSec. This is a very useful anti-malware/phishing feature.

SurfShark has a split tunneling feature called the Whitelister. It’s a twist on traditional tunneling, but SurfShark is unique. It is available for Windows and Android devices. You can add apps or websites to the Whitelister and block them from routing through the VPN tunnel. However, the service made it clear that they will soon be adding more support.

You can also count upon a great, well-rounded VPN service. SurfShark is very fast, but also very user-friendly. It offers more than 3,200 servers in 65 countries. All servers can be used P2P and have private DNS.

All of this costs less than a few dollars per month. SurfShark is the most affordable VPN service, especially when you choose a long-term plan.

It is possible to set it up using one of the 3,000+ servers located in 94 countries. ExpressVPN offers a wide range of protocols including the inhouse Lightway protocol.

This VPN is considered one of the best in the business. It offers private DNS for every server, strong network encryption and doesn’t store any connection logs.

Private Internet Access is one of the best VPNs available. It offers excellent split tunneling features. Split tunneling is supported on nearly every platform. This supports Windows and macOS as well as Android split tunneling. PIA is a top-rated provider for the wide range of devices it supports.

The rest of PIA’s service, however, is comparable to the best in business. This VPN provides over 35,000 servers in 78 countries. These servers are lightning fast and don’t have data bandwidth caps. Connect up to 10 devices and enjoy split tunneling across all your devices. You also get strong encryption and a variety of solid protocols.

IPVanish is the best VPN for mobile users. It is a very simple and solid VPN, which makes it easy to use. It supports split tunneling via its Android app. There are more than 1,600 servers available in over 75 locations. Split tunneling allows you to use advanced encryption or multiple connections.

Split tunneling features of IPVanish are easy to set up and use. The cost of the service is very affordable. It comes with a 30 day money-back guarantee and allows you to connect to unlimited devices for one subscription. The service is extremely powerful and can unblock all major streaming services worldwide.

How can you tell if a VPN uses split tunneling?

Visit a website that displays your IP address to see if the VPN is split tunneling. It should show your local network, not your VPN server. This means that the data packets were not properly routed. You can use VPN split tunneling with Windows 10 devices by using a PowerShell command to check and enable it.

Split tunneling or full tunneling may not be the best option for you. Here’s a quick rule of thumb. Split tunneling is better if you need additional security and don’t want to slow down your connection. You should make sure your network is protected and private by using a VPN.

Which VPN protocol is best for splitting tunneling?

WireGuard split tunnels are the best VPN tunneling protocol. WireGuard is one the most efficient and fastest VPN protocols. It’s also very safe and highly adept at protecting sensitive and private information.

Is Split Tunneling Worth It?

We recommend that you sign up for NordVPN, Surfshark if you are an Android or Windows user. Split tunneling with expressVPN would be the best option if you are a macOS user. Each of the five VPNs that we have discussed is capable of offering you a great Split Tunneling feature on which to rely.