Home VPN What is Double VPN? Is it better and more safe? 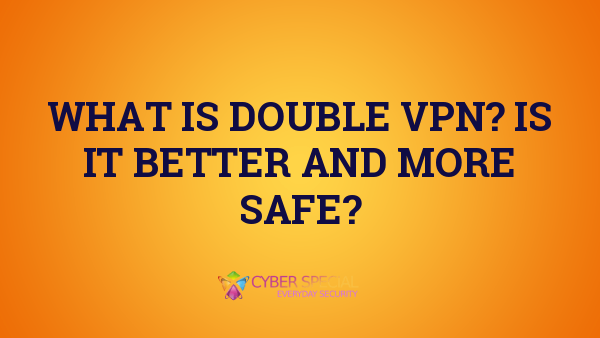 To protect your privacy online and ensure security, virtual private network encrypts Internet traffic. It makes it impossible for unauthorised parties to access or intercept information in the VPN. This tool allows users to stop hackers from stealing information over the Internet, limit internet service providers’ log activities, and prevent governments from tracking online activity.

Given the threats to information privacy and security, VPN usage has seen a rise in popularity. The creation of Double VPNs has been made possible by businesses.

Do not be confused if you don’t know what a double VPN does or how it works. We’ll explain everything you need to know about double VPNs, including how they work, their benefits and drawbacks. We will also discuss the differences between double VPN, obfuscation and the onion router.

Double VPN functions the same as a regular VPN. Double VPNs can route information through not one, but two VPN servers. A double VPN conceals your IP address twice, rather than just one like standard VPNs. Double VPNs add a second layer to encryption because Internet traffic is routed through two VPN servers.

Double VPNs can also be known as multi-hop or double-hop, chained and nested or cascading VPNs.

Multi-hop VPNs are another type of VPN, and they have become synonymous with double VPNs. Multi-hop VPNs allow multiple VPN connections at once, unlike double VPN which allows you to set up two servers. Multi-hop VPNs send traffic through multiple servers before reaching the public Internet. Each server adds an additional layer of encryption and an IP address.

Double VPN: How Does It Work

The working principle of double and chained VPNs is quite simple.

Double VPNs are safe. This double VPN is private and secure, just as a regular VPN. A second VPN server can be added to double the security of a traditional VPN connection.

Let’s say hackers get the key to one VPN server. The key for the second VPN server is still encrypted, so it’s impossible for an intruder to steal confidential information.

The second VPN server in double VPN does not see the sender’s IP address, and has no idea about the source. The server believes that the data came from the first VPN server. The ISP also has no idea where the Internet traffic will end up. The destination for your information or requests is the second VPN server. ISP has no other visibility beyond this stage. Double VPN protects against VPN correlation attacks, which can link traffic to VPN users.

These are the advantages of Double VPNs

More Protection from Hackers and Enforcement

A nested VPN doubles the security of user data, making it more difficult for hackers to steal it and then convert it back into readable form. This technology protects users as well as businesses against sophisticated attacks such traffic correlation attacks. These attacks are where cyber-attackers use internet traffic to reveal information about the sender, destination, and message content.

Double VPNs provide complete anonymity by changing the IP address. The sender’s destination cannot be seen by the internet service provider (ISP). The nested VPN cannot see the sender or the recipient of internet traffic. Although the VPN server can see data from your smartphone or computer, it cannot see beyond the second server to determine the website you visit. The second VPN server, however, can only see the destination site and cannot determine the source information, which is your device.

A double VPN makes it very difficult for third parties to trace traffic back at an end-user. You can hop online between servers located in different locations to bypass strict government censorship.

If you live in an area that allows only connections to IP addresses and websites within the country, a double VPN may be useful. First, you connect to the server in your country. Then, select the server abroad where traffic will exit. If you’re in Asia and connect to a VPN server in Europe via a second server in America, then anyone in your country will believe you’re visiting US websites. Any European spying on you will think that you are in the US.

This is how to setup and use a double VPN.

Method 1: A Double VPN Solution From a Vendor

A double VPN solution can be obtained from one of the top VPN providers, NordVPN. This offers two VPN servers in a fully encrypted network. Most VPN vendors don’t offer double VPNs.

Double VPN vendors should have no logs policies for such situations. This means that they do not keep any customer records or identifiable logs. Double VPNs from remote companies are better than single VPNs that are based in the country. This will prevent government surveillance and intervention.

It is important to ensure that the solution provides all the functionality of a double VPN. Some vendors simply forward your traffic without encryption, such as your IP address, messages and destination sites. You are still vulnerable to many cyberattacks.

Method 2: A VPN on top of another

A double VPN can be set up by using two VPNs at once. You can have one VPN installed on your smartphone or laptop and another on your router. Two VPN providers or solutions can offer maximum security. This will result in a significant decrease in internet speed.

Method 3: Setting up a double VPN using a virtual machine

A virtual machine can be installed on your device to create a second VPN. To set up the double-hop VPN, follow the steps below:

There are some drawbacks to a double VPN. Double-hop VPNs are based on two basic principles: double encryption and chaining two VPN servers. This solution has its drawbacks.

A Double VPN is a must-have for anyone.

A chain VPN isn’t worth the performance compromises for an average user. Standard VPNs with strong encryption and security controls such as malware protection or ad blocking provide adequate privacy and security.

Chained VPNs can be used for

Double VPN connections should be fast enough before you connect. You should have sufficient resources on your device to handle the extra computing overhead required for encryption and decryption, as well as the distance between the VPN servers. Double VPNs are not suitable for online activities that require low latency or speed.

An onion router (TOR), a web browser, anonymizes web traffic to protect your online identity. An onion network encrypts user traffic multiple times as it passes through several servers or onion routers. Each onion router is given an encryption key. The router then “peels” another layer of encryption to forward the internet traffic to the next router. Your computer or smartphone has all keys and can decrypt the message. Intermediary servers can’t determine the contents of the message, source, and destination.

Users can be quickly identified by ISPs and governments as they access the TOR network. You can improve privacy and information security by connecting an Onion to a VPN server. This configuration ensures that all traffic is routed through a VPN, and then onto an onion network. It also leverages the capabilities of both technologies.

Onion over VPN can appear, by its very definition to be the same thing as a double VPN. There are differences between the two systems. Double VPN privacy solutions send internet traffic through two VPN servers and encrypt it twice. The Onion over VPN sends internet traffic through one VPN server, and an onion network of volunteer-operated servers.

Double VPNs work by sending traffic through two VPN servers and encrypting it twice. An obfuscated VPN server, on the other hand, uses unique algorithms to conceal that you are using TOR or VPN to bypass internet restrictions. It makes it look like regular internet activity. Obfuscation hides the fact that privacy protection software is being used to make it appear that VPN tools are not in use. This technology can be used to overcome excessive third-party surveillance. Combining VPNs and obfuscation can help bypass VPN blockers in areas where privacy tools are banned.

Double VPNs will become increasingly popular and be available from more vendors. This tool provides enhanced privacy and security to users who are extremely concerned about online security and privacy. There is a possibility that a nested VPN could cause speed problems as it encrypts data twice, routes Internet traffic through two VPN servers located in different places, and speeds up the process.

NordVPN offers Onion Over VPN, DoubleVPN and traffic obfuscation. NordVPN has over 5000+ servers across 59 countries. It also has an audited, no-logs policy.

This provider is very popular because it allows you to unblock streaming services such as Netflix, Disney+ and Hulu. It supports torrenting and P2P traffic and has very fast speeds.

It has two kill switches, one for internet connections and one for apps. It supports up to six simultaneous connections, and it has apps for every platform – Windows, Mac OS, iOS, Android and Linux, as well as routers.

NordVPN offers a 30-day money back guarantee on all plans. It also accepts cryptocurrency.